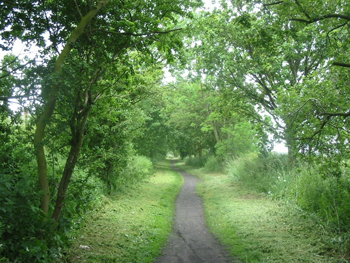 The Trail supports a wide range of habitats, because it crosses two distinct geological areas. These are the Sherwood Sandstone to the north around Bilsthorpe and Farnsfield and the Mercia Mudstone further south from Kirklington towards Southwell.

The Sherwood sandstone is acidic and supports soils low in nutrients yielding relatively few species. Typical habitats on this part of the Trail include scrub and acid grassland.

The Mercia Mudstone is entirely different, being characterised by species rich meadows and woodlands. Species to look out for among these habitats include the common lizard (in the open areas around Farnsfield), various birds of prey including sparrow hawks and many butterflies, for example, the speckled wood.

The trail is 7.5 miles and built on the former railway line of the Midland Railway. It stretches from Southwell to Bilsthorpe and passes the villages of Farnsfield, Kirklington and Maythorne. You can walk, cycle or horse ride along the trail and there are a number of free car parks to allow access. The Trail is most easily accessible by all at Farnsfield, elswhere barriers have been raised to assist wheelchair access.

It is an important route for wildlife and provides a green corridor through the landscape. Species to look out for include the common lizard, various birds of prey including sparrow hawks and many butterflies. Visitors can spot the diverse bird population including yellowhammer, spotted flycatcher, goldfinch, green woodpecker, willow tit and common whitethroat. The Friends of Southwell Trail lead bird, wildflower and tree identification walks throughout the year.