Shale gas is found in impermeable shale rock. This means it is tightly trapped inside the rock and has to be extracted.

Hydraulic shale gas extraction involves drilling into the ground both vertically and horizontally to reach the shale rock layer. A mixture of water, sand and chemicals is pumped under high pressure into the bore hole to fracture the rock underground. This process is known as hydraulic fracturing.

The chemicals – around 2% - are used to provide lubrication for the drill and to kill any bacteria.

Sand is used to keep the fractures in the rock open as the gas flows out of the rock.

By breaking the rock apart, the gas trapped inside is then released and collected.

Why is there more interest in onshore fracking?

The National Planning Policy Framework [PDF] expects Mineral Planning Authorities, like Nottinghamshire County Council, to provide for the extraction of mineral reserves of national importance. Any applications for shale gas development will be rigorously reviewed against national and local planning policies to assess their merits.

In July 2016 the Department of Energy and Climate Change (DECC) became part of the Department for Business, Energy and Industrial Strategy (BEIS). BEIS will have responsibility for setting central government policy, in particular on Energy Security and Energy Mix and Oil and Gas legislation.

Following the granting of Royal Assent to the Energy Act in May 2016 the Oil and Gas Authority (OGA) was established as an independent regulator in the form of a government company. The OGA will act as an independent agency with regulatory powers.

How is the process controlled?

The fracking process is strictly controlled in the UK. The Government has set a framework for any company to follow which requires licences and planning permission for each of the three stages: exploration; appraisal and extraction.

Checks are made by the regulatory bodies involved at each of the three stages involved in the fracking process to make sure the site can operate safely.

The UK has over 50 years of experience of regulating the onshore oil and gas industry nationally. More than 2,000 wells have been drilled onshore during that time and companies work closely with the Health and Safety Executive to make sure sites are safe and to meet the requirements of any relevant legislation.

Shale gas is made up of methane gas that is trapped in layers of impermeable shale rock found at depths between 1,500 and 4,200 metres. Shale gas development involves constructing a well to drill into the ground vertically and horizontally to reach the shale rock layer. A mixture of water, sand and chemicals is then pumped under high pressure into the bore hole to fracture the shale rock to enable the gas to flow out. This process is known as hydraulic fracturing or ‘fracking’. The sand keeps the fractures in the rock open as the gas flows out of the rock.  The chemicals - around 2% - are used to provide lubrication for the drill to help to reduce friction. 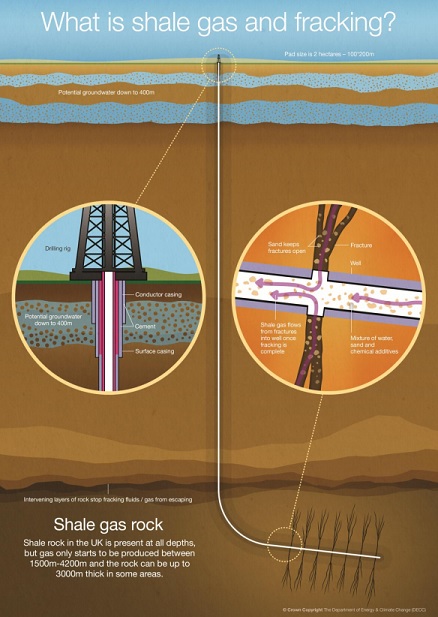