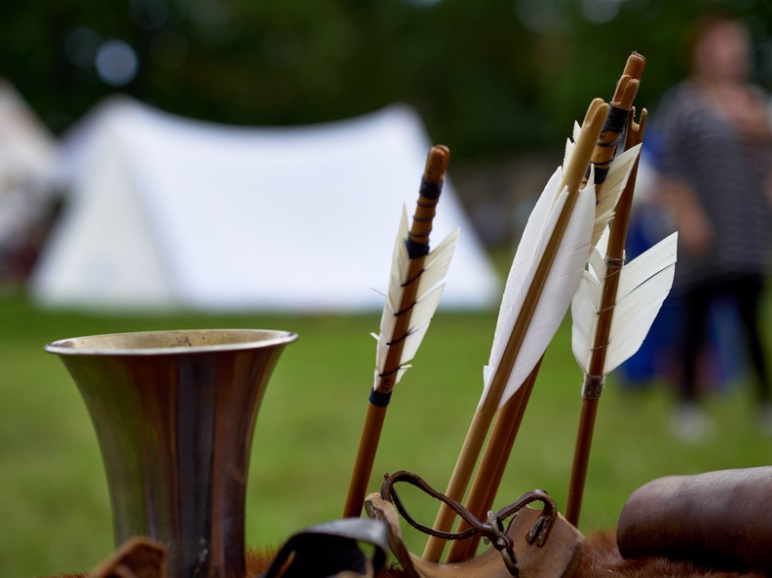 Nottinghamshire is famous around the world as the home of Robin Hood, but did you know about our link to America through the Pilgrims and Wampanoag tribe at Thanksgiving, or Nottinghamshire's key role in the English Civil War?

Find out more below, visit Nottinghamshire Archives, or local studies in our libraries to discover more of Nottinghamshire’s history, with collections covering over 800 years.

Robin Hood is generally placed in the 12th Century in the time of Richard the Lionheart and King John. When King Richard returned from the third Crusade in 1192, he was captured and held hostage in Austria to ransom for a huge sum of money. John saw this as his chance to claim the throne and seized it for himself. When Richard was released, he returned to England with an army and marched on John’s remaining supporters. One of John’s last strongholds was Nottingham, which Richard besieged in March 1194. He oversaw the construction of a giant trebuchet to pound the walls. Fearing the worst, the castle’s garrison surrendered before the great siege engine could be used.

Through various retellings of Robin Hood a consistent story has been produced. This includes Robin Hood and his Merry Men living in Sherwood forest, stealing from the rich to give to the poor, and fighting against the Sheriff of Nottingham who is often depicted as helping King John usurp the throne while Robin Hood remains loyal to King Richard.

Robin Hood is a symbol of hope, justice, and right triumphing over wrong. The narrative of him and his band of merry men coming together to defend and protect the rights of the poor and support the common people of Nottinghamshire is a great example of people coming together to support each other, even in a country divided by two Kings.

William Brewster, the religious leader of the Pilgrims, was originally from Scrooby, Nottinghamshire and the Puritan separatist group that would later be known as the Pilgrims first began to meet at Scrooby Manor.

When the Pilgrims finally arrived in America it was only with help from the Wampanoag tribe that they were able to survive. On March 16th 1621, Samoset, an Abnekaki Sagamore, entered the pilgrim’s settlement and arranged a meeting between the pilgrims and the Wampanoag chief, Massasoit.  They also met Squanto, who had been abducted in 1614 by an English explorer and had spent five years in Europe as a slave and then as a freeman in England. He had returned to New England in 1619 and was crucial as a translator. On March 22nd Samoset, Squanto, and Massasoit established a formal treaty of peace with Governor Carver of the pilgrims. The Wampanoag tribe taught the pilgrims how to grow and harvest food and traded crucial materials with them.

In November 1621, the surviving pilgrims celebrated a harvest feast which became known in the 1800s as "The First Thanksgiving". The feast was celebrated by the 53 surviving Pilgrims, along with Massasoit and 90 of his men. Today, Thanksgiving is not celebrated by many Native Americans and is instead observed as a day of mourning and a reminder of the tragic effects of European colonisation. Despite this, the first Thanksgiving was originally a peaceful event and a genuine occurrence of two groups with drastically different lifestyles and beliefs coming together in celebration. It is this collaboration of the pilgrims and the Wampanoag that encompasses our themes of Nottinghamshire Day of people coming together, despite their differences.

More about the Mayflower Pilgrims

Nottinghamshire had a crucial and significant involvement in the English Civil War, particularly through Nottinghamshire Castle where the standard was first raised and Newark castle which faced three sieges. During the 17th century, the most important routes north took travellers via crossings over the River Trent at Newark and Nottingham and this owes to Nottinghamshire’s crucial position during the Civil war.

The Civil War was a time of great division as the country became split between Royalists and Parliamentarians and is often described as a war that pitted brother against brother, and father against son. Despite this, there is evidence of unity and friendship between individuals on opposite sides and physical evidence, such as letters and posy rings, that show individuals hoping their friendships will survive the war.

The Civil War also have various themes that are still incredibly relevant today. The Civil wars opened the country to a flood of new political, religious, cultural and scientific ideas and many traditional ideas began to be questioned. The war also created a refugee crisis as many farms and houses were destroyed and thousands of refugees left Ireland.

There is an abundance of Civil War material in Nottinghamshire but some of particular interest are Newark castle, the Queen’s Sconce, Charles I pearl earring housed at the Portland Collection at Welbeck, and a variety of items, including a Posy Ring, at the National Civil war Centre in Newark.