Gritters go out when forecasts suggest:

Roads do not cool down nearly as quickly as objects such as cars. This means frost on a car can be a misleading guide to whether gritting is needed on the roads.

When our gritters have been out salting Nottinghamshire roads, this won't necessarily prevent snow from settling on roads.

When we spread salt on roads it will mix with any moisture and create a saline solution (basically salty water). This has a lower freezing point than water and therefore helps stop ice form on the road, even though the temperature is below the freezing point of water.

The actual freezing point of a saline solution depends on the salinity (strength), and that relates to how much salt we put on to roads or how much residual salt is present on the roads (e.g. from previous gritting runs).

We apply an amount of salt to ensure, as far as possible, that the salinity of any moisture on the roads is sufficient to prevent ice forming. We usually apply 15gms/m2 or 20gms/m2.

At temperatures below minus 6 degrees the effectiveness of the salt is reduced. Therefore there is a chance that ice could form even though we have gritted roads.

Salt will not directly melt snow. It first has to mix with the snow to form a saline solution.

We spread the salt in advance of snow so it can start to mix to create the saline solution, to help to reduce the accumulation of snow and also help to prevent ice forming.

However, in prolonged periods of snowfall, the snow can fall at a rate faster that the salt can mix with the snow. Therefore snow will accumulate no matter what we try and do in advance. 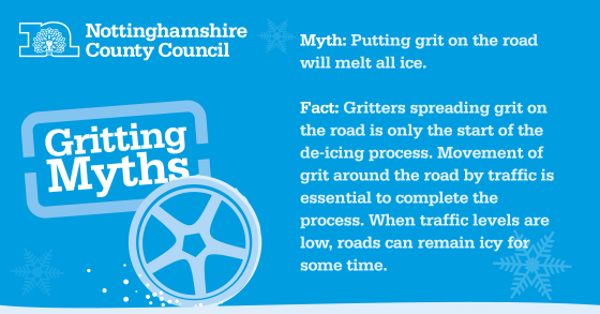 Vehicles travelling on the roads help the process by breaking down the snow and helping the formation of the saline solution.

So, when you look at a main road and see snow has settled, it does not necessarily mean that the road has not been treated. It simply means the rate of snowfall has been enough for it to accumulate while the salt is still mixing to form a solution.

Sign up to our winter weather newsletter to keep updated through the winter months.

Which roads we grit

When required we grit:

This is one third of the county's entire road network. This amounts to approximately 1,121 miles, further than driving from Lands' End to John O'Groats.

When severe weather is forecast and resources permit, we also grit:

Busy footways in pedestrian areas and town centres are treated when ice or settled snow is likely to persist for more than 24 hours.

In extreme circumstances and following the completion of main and severe weather routes, some additional gritting may take place.

All requests are subject to resources, conditions and local issues.

Some roads in Nottinghamshire are gritted by other organisations:

We stockpile 20,000 tonnes of salt at the start of winter, 100% more than the offical government recommendation which puts us in a very strong position for dealing with the worst of the winter.

We have four salt barns at:

Salt barns protect the salt from clumping together after rain which would make it difficult to spread.

We also have a smaller, open-air storage site at Giltbrook which can store an additional 2,000 tonnes of salt.

You can spread grit or even ordinary table salt outside your property and clear snow from the road or pavement.

The government has issued guidance saying it is unlikely that you would be sued or held responsible if someone is injured on a path or pavement if you’ve cleared it carefully.