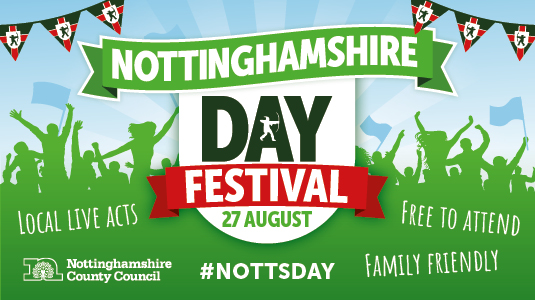 THIS EVENT HAS NOW TAKEN PLACE

Thank you to the performers, traders, stall-holders and the good folk of Nottinghamshire  who joined us for a lovely sunny day in Sherwood Forest.

Grab a selfie with the European Cup

Football lovers will have chance of a selfie with the European Cup, which newly- promoted  Nottingham Forest famously lifted twice in 1979 and 1980.

Members of the  Nottingham Forest Community Trust will also be on hand to talk about their work.

Robin Hood will also come  to life at the event – as part of the world-first 5G Connected Forest research which is led by the county council, working with academic researchers and local businesses to boost tourism and the environment.

Visitors will get a chance to try out one of the world’s first interactive holographic movies, starring the legend himself, using multi-media headsets.

The project also includes the  UK’s first forest-protecting  robot dog, Gizmo, who will  also be on display.

Sneak preview can be viewed here.

Visit the team from Cresswell Crags

If you would like to roll back the years to the Ice age, the team from Cresswell Crags have lots for you to get involved in. Why not have a look at artefacts from millions of years ago, how about trying your hand at archaeological digging and being creative with some ice age art activities.

Stop by at the Bassetlaw Museum and see first hand, objects, costumes and games relating to the pilgrims and Nottinghamshire

The National Civil War Centre is on Tour! Items from the centres collections will be on show, including mystery objects from Nottinghamshire's social history, and civil war objects that highlight Nottinghamshire’s turbulent past.

Portland Charity supports people with disabilities to lead more fulfilling, independent lives. As a specialist college, residential care provider and Centre of Excellence for Autism, it delivers a wide range of education and care programmes to support people to achieve their goals. The team will be at Sherwood Forest promoting our college, care services and commercial businesses to a wide audience as well as fundraising for our charity.

ROB GREEN is a vocalist/songwriter from Nottingham who draws from the R&B, soul, indie, rock and gospel music he was raised on to inspire the guitar led alt/soul music he makes.

ALT BLK ERA are the sister duo Nyrobi and Chaya, who break the rules by reaching outside of traditional expectations. They give a chilling circus-type vibe in many elements within their craft. Their alternative music is filled with harmonies, heavy basslines, dark strings, rock, and rap.

Betsey B has a voice described as "beyond her years". Betsey's big, powerhouse vocals leave everyone feeling emotionally moved. This shines through her great storytelling and raw, jazzy tone.

Builders of the boat are a duo based in Nottingham, made up of Samuel and Joe. Their lyrics are life inspired and sweet electric guitar riffs inspired by Joe's craziness. Builders of the Boat began in 2017, with the aim to create sweet melodies, tell beautiful stories, and most of all, get people dancing (or just quietly tapping their foot to to beat).

Builders of the boat

Akash Parekar and Harkiran Sahota are a dynamic duo who will endeavour to take you on a journey to the heart of India through an enthralling improvised duet. Akash is the disciple of the renowned Sitarist and educator, Ustad Dharambir Singh (MBE). Harkiran started by learning the basics from his father, Surendar Singh Sahota, beginning his serious training in 2014 when he became the disciple of the world renowned tabla maestro Pandit Sanju Sahai.

Jack Chapman is an artist, born and raised in Nottingham. His track ‘Into The Middle’ was played by Gemma Bradley on her BBC Radio 1 show saying “I love this track”. With his eclectic range of musical influences including Sam Fender, Kings of Leon, Tame Impala and Bon Iver , it's easy to see where he gets his ear for a catchy tune.

JERUB has been finalist in 2021’s BBC Radio 1 Live Lounge Introducing talent search. The Nottingham singer-songwriter has shared his debut EP 'Feel It' featuring uplifting new single 'High'. Standing out as an artist whose music is filled with depth and raw emotion, JERUB released his debut single 'Paint Me in Gold' in 2019 and he’s gone on to build a beautifully pensive style that blends gospel, pop and indie influences.

Jess Fisher first made music back in 2014, when Inspire Youth arts came into her school and started a group called the Able Orchestra. Since then Jess went on to perform with the Able Orchestra at performances like the Hockley Hustle collaborations with Big Fish Little Fish, Next Door Dance and champion beatboxer THePETEBOX ,The BBC Ten Pieces Proms at the Royal Albert Hall in 2016. In January 2020 had a Manchester debut as part of the Association of British Orchestras (ABO) conference. Jess hopes to inspire other people to get involved with music while trying to remove and break down barriers in the music industry for disabled people.

Notts Outdoors are the outdoor and environmental education service from Nottinghamshire County Council.

We're all about discovering the great outdoors, having fun and making memories to last a lifetime.

Phil Ashmore and the unit 5

Remy CB is a young singer songwriter who has been involved in IYA projects from 2017 and in 2019 he won the Future Sound of Nottingham, also opening the Splendour Festival of that year. He has now become an independent artist and continues to write, record and produce music with leading slots at the Bodega, Beat the Streets, Rescue Rooms and other festivals, along with our own BBC Intro show at Metronome in 2019.

A day in Sherwood Forest wouldn't be complete without a live Robin Hood re-enactment!

Robin Hood, Marian and their band of outlaws will do battle against the Sheriff and Prince John in an exhilarating two-part combat show ‘Lionheart’.

Semper Dowland, a local ensemble which specialises in the performance of music from the Medieval and Renaissance periods. Formed in 2017, they are based in the Mansfield area and perform locally. Most recently they performed at the vibrant Warsop living museum event in March 2022.

They are primarily a vocal ensemble which also uses period instruments in their performances. They use period costume in performance and aim to provide engaging and entertaining programmes to suit a wide range of audiences, which may or may not have had any previous experience of music from the medieval and renaissance periods.

Tash Bird is a singer-songwriter based in Nottingham. Embellishing every tune with her husky vocals, her relatable lyricism and colloquial stage presence never fails to leave audiences wanting more and feel like they’ve made a new mate in Tash.

The name 'Tash Bird' has appeared on various festival line-ups over the years including Y Not Festival, Splendour, Dot to Dot, Edinburgh Fringe Festival and more. Along with the UK, Tash has toured around Europe, New Zealand and the East Coast of the United States. In 2016, Tash's debut EP ‘Normal is Boring’ reached the top 20 in the iTunes UK singer-songwriter charts. Since then she has released multiple singles which have all receive great support from BBC Introducing.

Times are a guide and could be subject to change.

Getting there and parking:

We have teamed up with Inspire Culture Learning and Libraries' Youth Arts team (IYA) to bring some of the county's most exciting young artists to the festival. IYA has worked with a number of the artists as part of their record label eNGine Room, and on other projects, mentoring with song writing, music production, recording, performance opportunities and promotional activities, to help develop as professional artists within the industry.

Notts Outdoors are the outdoor and environmental education service from Nottinghamshire County Council.

We're all about discovering the great outdoors, having fun and making memories to last a lifetime.

Find out more about Notts Outdoors

Connect to the 5G Forest

As part of the celebrations for Nottinghamshire Day on Thursday 25 August, Gedling Borough Council has organised events and activities to celebrate all the great things about Nottingham and Nottinghamshire.

The events will take place on Thursday 25 August starting with the raising of the Nottinghamshire flag by the Mayor of Gedling, Councillor Peter Barnes, at the civic centre.

From 11:00am there will be a host of activities for children with Gedling Play Forum, history walks around the town centre with local historian, Bob Massey, as well as street theatre, health and wellbeing hubs and other great activities to celebrate Nottinghamshire Day.

Are you feeling hungry?

The annual Taste of Rushcliffe food festival returns to West Bridgford on Saturday August 27 with Nottinghamshire’s own Annie’s Burger Shack among the star attractions in a celebration of fabulous local food flavours.