Cameron is 15, and lives in Calverton. He attends Calverton Young People’s Centre and was nominated by youth worker Mohammed Yaseen.

Cameron was nominated by his youth worker in Calverton for the way in which he has transformed his life and overcome several personal issues in the process.

Mohammed Yaseen explains, “Cameron is a popular young man in Calverton. He studies at Colonel Frank Seely School and has made a remarkable change in direction in his academic work not only by achieving targets this year but being predicted to achieve several GCSE’s between A* and C next year. In addition this year, he has established his first social enterprise training scheme (called CLF gardening) with two other young people from the village.” 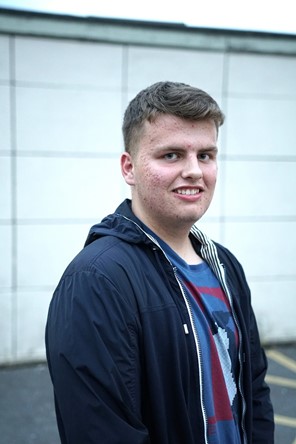 For many years Cameron had experience bullying because of being overweight. He struggled with poor self-image and his academic performance deteriorated and he was seen by youth workers to be behaving in an anti-social way more and more.

Mohammed continues: “With support from youth workers, Cameron became involved in community clean-ups. He started with his own street and then parts of his wider neighbourhood. He has since volunteered to tidy up local elderly people’s gardens and, inspired by his uncle, he has established a social enterprise to help young people earn money at weekends and holiday periods by undertaking gardening jobs, thus diverting them from causing a nuisance on the streets.

“The aims of the social enterprise include tackling social problems caused by youth unemployment and anti-social behaviour, improving community spirit and pride in public spaces, and improving young people’s life chances and the environment."

Cameron lives at home with mum Jessica and has a brother, Luca, eight. By adopting a more positive outlook and healthier lifestyle, Cameron has altered his physical appearance by losing three stones in weight. He has significantly improved his academic performance. He also undertakes care responsibilities for his younger brother.

Mohammed concludes: “Cameron has firmly established himself as one of the youngest entrepreneurs in his village and has created part-time jobs for other young people. He now enjoys a very positive image within his community and is highly regarded by many residents. He has led a litter collection and needle clean up in his local park, in liaison with county council grounds staff, and through this is making a valuable contribution to local environmental safety.

“Cameron is committed to making a difference to his local community. He is conscientious and his developing skills may potentially lead to a future career in landscape gardening.”

Cameron's incredible efforts in transforming his life meant he was named the overall 2016 4Uth winner for Nottinghamshire.