The overall winner in 2014 was Tiegan Hull from Keyworth. Tiegan was nominated because of the way in which she supported her terminally ill father Timothy and the way she responded to challenges after he passed away, as well as for her work in her local community.

The 2013 4Uth county-wide winner was Sarah Miles from Ashfield. Sarah cares for her mother and lost her dad two years ago to bone cancer in September 2011 after he spent three years battling the disease. Sarah cared for him throughout this period and has been her mum's carer since 2010.

She wakes up every day at 6am to check how her mum is feeling and supports mum by dressing her and getting her food ready if she needs it that day. 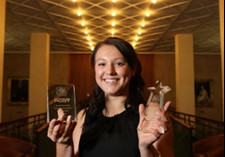 Bassetlaw’s Lauren Hall was crowned as the overall winner of the 2012 awards.

Lauren Hall, 18, from Ranby, was initially nominated by teacher Maria Hall. In Year 10, Lauren suffered a head injury following a sudden collapse which resulted in partial vision, and she was also diagnosed with Coeliac disease which led to blood sugar problems.

Despite a very weak auto immune system she finished her GCSEs with some excellent results and joined Retford Post 16 to do her A levels and alongside her studies she took part in other activities such as trampolining (reached Nationals and coming sixth), coaching it and tutoring street dance.

She was forced to give up sport after collapsing in March - it was discovered she had heart related problems. Despite this huge set-back, she continues to coach from the sidelines as a sports leader for the district council alongside her studies and is looking to the future positively.