< Back to: Stories of community support during the Coronavirus pandemic

A Hucknall schoolboy has been doing his bit to support front line health and care workers by making ear savers at home on his 3D printer.

13 year old William Foster was inspired to make the ear guards after seeing pictures of people he knew suffering from bruised and sore ears as the elastic of their face masks rubbed them when they wore them for long shifts.

William said: “I felt bad that people on the front line were being hurt and I just wanted to make sure they were OK. I didn’t want them to be hurt while they were helping other people.”

He spotted the idea after one of his fellow scouts from Canada posted that he was using his 3D printer to make the ear savers and William asked his mum if he could do the same. He started off making a few ear savers for friends and neighbours who worked in care homes. The family then approach the local doctors’ surgery who placed an order.

William’s mum, Clare Foster, then got in touch with his school Holgate Academy to let them know what he had been doing and put a message on their Facebook page that William was happy make more ear savers for other organisations. And the orders have flowed in ever since!

Clare said: “I’m completely blown away by what he’s done. He normally struggles at times like these, but being a scout has inspired him to do much more and see how he can help other people. He just loves doing something for other people and it’s great to see how much love he’s had back. I’ve shown him the feedback he’s had and it’s super exciting!”

William has orders for 480 ear savers in total from care homes, community midwives, ambulance staff, hospitals and fire stations. The latest order has come from Nottinghamshire County Council for their social care staff.

Ainsley Macdonnell, Service Director at Nottinghamshire County Council, said: “I think what William is doing is fantastic and it’s so heart-warming to hear about a young person doing something so selfless. Our social care staff will really appreciate the comfort these will give to them when they are working. Thank you William.”

William and his family are not charging for the ear savers they are making for front line staff. They are being supported by a non-profit organisation called NHS PPE which is fundraising for personal protective equipment. People can donate and help towards William’s project at https://nhsppe.net/donate. 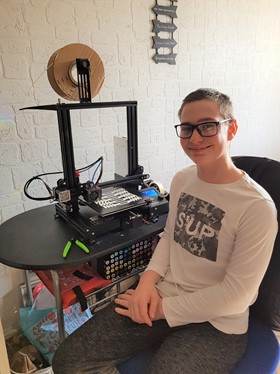