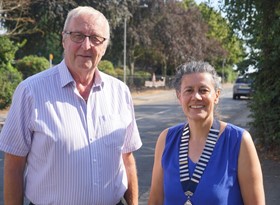 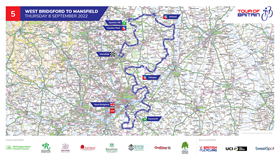 Tour of Britain organisers have revealed the Nottinghamshire towns and villages which will host the exciting sprints and King of the Mountains competitions during this year’s race – as well as the start and finish times.

The 116-mile, fifth stage of the showpiece event returns to the county on Thursday 8 September after a four-year absence, with the race starting at 10.45am on Central Avenue in West Bridgford and finishing between 3-3.50pm on Chesterfield Road South in Mansfield.

It will pass through several towns and villages, including East Leake, Radcliffe-on-Trent, Calverton, Southwell, Retford and Worksop – as well as take competitors along the recently-opened £49 million Colliery Way road (Gedling Access Road).

Now organisers have confirmed the sprints will take place along Main Street in Edingley, on London Road just after Bracken Lane coming into Retford, and Clumber Park.

The locations for the ŠKODA King of the Mountains climbs are Wysall Lane as the competitors enter Keyworth and Sparken Lane leading out of Worksop.

An interactive map and full timetables for the Nottinghamshire stage is available at tourofbritain.co.uk/stages/stage-five.

Councillor John Cottee, Cabinet Member for Communities at Nottinghamshire County Council and also divisional ward member for Keyworth, said: “With just over a month to go until some of the world’s top road cyclists come to Nottinghamshire, the announcement of the timings as well as the locations for the sprints and King of the Mountains are another milestone in the countdown to the return of the Tour of Britain to our county.

“Excitement really is stepping up a gear in the towns and villages the route passes through – and even more so where the sprints and King of the Mountains competitions take place.

“I personally cannot wait for my own village of Keyworth to give the Tour riders a huge welcome as they compete for the King of the Mountains section of the race along Wysall Lane.”

Keyworth Parish Council Chair, Cllr Tamsin Armour, described the news as ‘fantastic’ and says she is looking forward to the national and international spotlight being shone on the village as it was in 2018.

She said: “It will be fabulous, and the village will get together like it did four years ago when the race came to Keyworth.

“There were some amazing things which happened last time; children decorated bicycles which were displayed in all the shop windows, people knitted little cycling jerseys which they then stitched together and sent to Children in Need – a wonderful end to the whole thing.

“Last time people decorated their houses along the route, there was bunting and bright yellow bikes across the village.

“It was a really good day with people out in the middle of the village; it was great for the shops and there was a good sense of community here.

“If I’m honest, apart from the way we pulled together through Covid, it was the best sense of community I’ve felt in this village since I’ve been involved with the Parish Council. It was a superb day.

“It was a really great village experience and it’s so exciting that we’ve got the King of the Mountains, that’s going to brilliant. I hope it will be challenging for the cyclists!”

As well as serving as popular viewing locations for spectators, the points on offer at each location go towards determining the outcome of the hotly contested ŠKODA King of the Mountains and sprint jerseys.

The points on offer at the ŠKODA King of the Mountains locations is dependent on the severity of the climb; category one peaks offer 10 points for the winner down to one for the 10th-placed finisher, while category three climbs have four, three, two and one point up for grabs.

Prizes on offer at each sprint remain consistent throughout the race; three, two and one point are awarded to the leading trio across the line, all of which go towards the sprints’ classification. Those riders will also receive bonus seconds of the same denomination.

The County Council’s website has more information about the Nottinghamshire stage of the race, including details about our schools pack and competitions we are running.

You can sign up for our emailme bulletin to get all the latest Tour of Britain news delivered straight to your inbox.