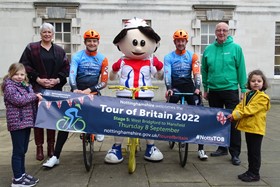 The eagerly anticipated Nottinghamshire stage of this year’s Tour of Britain cycle race will once again start in West Bridgford and finish in Mansfield.

It is the third time the showpiece event will take place in the county and follows the hugely successful staging of the race in 2017 and 2018.

This year’s race returns to Nottinghamshire on Thursday 8 September and will see the fifth stage begin on Central Avenue in West Bridgford and end on Chesterfield Road South in Mansfield.

It will pass through several towns and villages in the county, including East Leake, Radcliffe-on-Trent, Calverton, Southwell, Retford and Worksop – as well as take competitors along the recently-opened £49 million Colliery Way road (Gedling Access Road).

A global television audience of millions will watch the world-famous race, with the Nottinghamshire stage attracting 250,000 spectators in 2018 to make it the largest sporting event in the county’s history.

It led to our area enjoying an economic boost, with £3.9 million being spent by participants and spectators on accommodation, food and drink and shopping.

The Nottinghamshire stage four years ago also started in West Bridgford and finished in Mansfield.

Councillor John Cottee, Chairman of Nottinghamshire County Council’s Communities Committee, said he was looking forward to seeing thousands of people lining the route to cheer on the competitors.

He said: “The return of the Tour of Britain is fantastic news and today’s announcement detailing the route heightens the sense of anticipation as we prepare to welcome a world class field of riders and teams to our wonderful county.

“This provides us with a great opportunity to showcase our towns and villages along the route and we also look forward to welcoming the thousands of visitors who will flock here to watch the race and enjoy everything which Nottinghamshire has to offer – ultimately providing a huge boost to the local economy.

“Nottinghamshire is known across the globe for its sporting heritage and hosting the race for a third time in five years is recognition that we have what it takes to successfully stage major sporting events.

“As a council, we’re delighted that we’ve been able to bring the Tour of Britain back to Nottinghamshire and I’m looking forward to working with our district and borough council partners to ensure it’s going to be the best stage of the race.”

Rushcliffe Borough Council’s Cabinet Portfolio Holder for Communities and Climate Change Cllr Abby Brennan said: "We’re so pleased that the Tour will be coming back to Rushcliffe and Nottinghamshire, it’s sure to be another wonderful spectacle that our communities and residents can embrace.

“We can’t wait to give it another warm and rapturous reception as it races through so many of our towns and villages.

"We saw with the 2018 race here the incredible welcome Rushcliffe people gave to the riders, and this will be another great celebration that boosts many local businesses and will be a day for all to enjoy.

“The latest on the Rushcliffe part of the route is available at www.rushcliffe.gov.uk/tob.”

Andrew Abrahams, Executive Mayor of Mansfield, said: “Mansfield was keen to support Nottinghamshire County Council and district councils to secure the Tour of Britain for a third time, and, the opportunity to host a stage finish once more in our district.

“With support from the Towns Fund, we will be able to have a festival finale at the Civic Centre in September.

“We’d like to thank the Tour of Britain team for working with us to develop the route and enabling communities in priority neighbourhoods to experience this once in a lifetime opportunity to view elite sport from their doorstep.

“We’re looking forward to giving the tour the warmest of Mansfield welcomes again.”

The Tour of Britain starts in Aberdeen on Sunday 4 September and finishes on the Isle of Wight seven days later – and, in addition to our county, passes through the Scottish Borders, Redcar & Cleveland and North Yorkshire, Gloucestershire and Dorset.

Cycling’s premier road event in this country will feature the world’s top teams and riders, alongside the best British-based cyclists, with a field comprising of Tour de France winners, Olympians and world champions.

Nineteen teams and 114 riders are currently scheduled to take part in the race – including Mansfield’s Ross Lamb and Ollie Peckover, of Ruddington, who compete for the Ribble Weldtite Pro Cycling team.

Mick Bennett, Tour of Britain Race Director said: “We are pleased to be able to confirm the route for this year’s Nottinghamshire stage and look forward to making returns to both West Bridgford and Mansfield, as well as many familiar locations along the way.

“The support of Nottinghamshire communities along the stage route in both 2017 and 2018 was incredible, so with150 days to go until the race I hope that today’s news will inspire everyone along the route to get excited and to start making their plans for 8 September.”

The modern-day Tour of Britain was launched in 2004 and – apart from the Covid-19 pandemic forcing its cancellation in 2020 – has taken place annually every September over eight days.

Cycling’s premier road event in this country will feature the world’s top teams and riders, alongside the best British-based cyclists, with a field comprising of Tour de France winners, Olympians and world champions.

Live coverage of the race is shown daily in the UK on ITV4, in addition to around the world.

The Tour of Britain is part of the UCI ProSeries, making it one of the most prestigious sporting events in the sport’s global calendar.

Visit our Tour of Britain webpage for more information about this year’s race, including a map of the route.