Public consultation on £1.14 billion devolution deal to begin in November 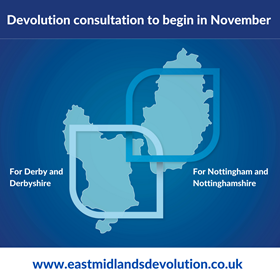 A public consultation about the East Midlands devolution deal is due to take place from 14 November until 9 January next year.

The leaders of each of the four councils signed up to work on a devolution deal on 30 August this year at Rolls Royce in Derby, after the Government offered the region a package of new powers and funding worth £1.14 billion.

Since August the councils have been working on agreeing a more detailed proposal for consultation, which includes more information about how devolution would work in our area.

The deal would provide the region with a guaranteed income stream of £38 million per year over a 30-year period, and would cover around 2.2 million people, making it one of the biggest in the country. It would also mean a new regional mayor and new type of combined authority for the area, from 2024.

“Devolution is about getting a better deal for Derbyshire and the East Midlands and achieving a fair share for our region. It will bring us more money and mean we can make more meaningful decisions here, rather than in London.

“This deal will bring more and better jobs and opportunities for training, improve the local economy, result in better transport and housing, and accelerate our route to Net Zero. I encourage everyone to take part in the consultation and give us their views on devolution.

“A devolution deal, should it be agreed, would be the beginning, not the end. We’re determined to build on this deal over time, as other areas have done."

“It’s great news that we’re moving forward with devolution plans for Nottinghamshire and the wider area. I’m really pleased that we’re making progress with this.

“Devolution can bring real benefits for local people, as it has done in other parts of the country. It will mean more funding for our region, and the opportunity to have more meaningful decisions made here, near the people they affect, rather than in London, so they can be better tailored to local needs.

“This is an opportunity to create jobs, boost our economy, enhance transport, build more and better homes, improve our environment, and more, and we need to grab it with both hands. I don’t want our area to miss out on a chance to improve things for everyone who lives and works here.

“Devolution can help us be more effective locally, make better use of public money, and most importantly, improve people’s lives. It would lay the groundwork for us to build on in the future, to benefit future generations.

“I’d encourage everyone to take part in the consultation and give us their views on the devolution deal.”

“The East Midlands has long been overlooked and held back compared to other areas of the country. The cities and counties in our region should have a bigger voice, and this devolution deal would give us the influence, funding, and powers that we deserve.

“The investment in this deal will bring with it many opportunities. We could see more jobs, better transport and housing, an enhanced greener environment, and more value for money of services provided for our people.

“The proposals that we’re consulting on are just the beginning, and we’re determined to build on it over time. I would encourage everyone to give us their views on the deal by taking part in the consultation.”

“This deal has the potential to make a significant difference and local people would see the real benefits from the investment with more and better jobs, housing, training and much more.

“For too long this region hasn’t had the investment it needed and deserves - by working on a deal we can start to address this, but this is just the start, and I will make sure that we get our fair share and make the most of this funding.

“Importantly the deal would give us more control over our own area, where local people would have a say in the region’s priorities rather than decisions made in London. I look forward to hearing people’s views on the deal when the consultation launches.”

If the devolution deal goes ahead, it would create the first of a new type of combined authority, which requires new legislation from central government. As well as the £1.14 billion, it includes an extra £16 million for new homes on brownfield land, and control over a range of budgets like the Adult Education Budget, which could be better tailored to the needs of people in our communities.

The devolution deal is a level 3 deal, which offers the most local powers and funding. It would mean a new elected regional mayor, like those which already exist in other areas, who would represent both cities and counties. The role of the mayor would be to look at major issues affecting the whole region, give the area a bigger voice, and take advantage of local knowledge and expertise.

The deal means that a future mayor and combined authority could:

The four councils sent initial proposals to negotiate a combined devolution deal in March, after being named as pathfinder areas by the Government in February and then being invited to apply for a devolution deal.

The councils have been working with the Government to develop details of the deal, alongside discussions with district and borough councils, businesses, and other stakeholders.

If the devolution deal is formally approved, the Government will pass legislation bringing a new combined authority for the East Midlands into existence. The first election for a regional mayor for Derby, Derbyshire, Nottingham, and Nottinghamshire, would be in May 2024.

The regional mayor would lead the new combined authority, which would also include representatives from local councils, with decision making powers and resources moving from London to the East Midlands. Local businesses would also have a voice, as well as other organisations.

The devolution deal would not mean scrapping or merging local councils, which would all continue to exist as they do now and would still be responsible for most public services in the area. The mayor and combined authority would instead focus on wider issues like transport, regeneration, and employment across both cities and counties.

More information about the consultation, including a link to the online survey and other details, will be published online when the consultation begins on 14 November: www.eastmidlandsdevolution.co.uk