One month to go until Tour of Britain returns to Nottinghamshire 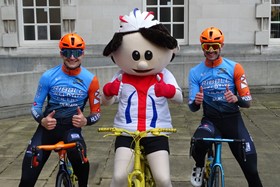 The countdown to the Tour of Britain’s return to Nottinghamshire for what promises to be an unforgettable day of cycle racing has officially begun.

Today (Monday 8 August) marks one month until the UK’s leading cycling event heads back to Robin Hood Country for its first stage there since 2018.

Over 100 of the world’s best riders will tackle a 186.8km (116.2m) stage that begins in the heart of West Bridgford (10:45am) and culminates in Mansfield (approximately 3pm) on Thursday 8 September.

The route will pass through Ruddington, East Leake, Radcliffe-on-Trent, Ravenshead, Southwell, Retford, Worksop, Edwinstowe and Warsop. A large crowd is expected to turn out to watch this free-to-attend sporting spectacle.

Councillor John Cottee, Nottinghamshire County Council’s Cabinet Member for Communities, said: “I cannot wait for the Tour of Britain to return to Nottinghamshire and, with just a month to go until some of the world’s best cyclists grace our county’s roads, the sense of excitement and anticipation is really stepping up a gear.

“Communities along the route are busy preparing to transform their towns and villages into a spectacular sea of colour to give the competitors a huge Nottinghamshire welcome as they make their way from West Bridgford to Mansfield on race day.

“The event will truly put Nottinghamshire on the international map, with a global TV audience of millions and the eyes of the world once again on us – and let’s not forget the thousands of people from outside the county who will come here to watch the race and enjoy everything Robin Hood Country has to offer.

"The two previous occasions the Tour of Britain passed through Nottinghamshire were a huge success and, once again, we’ve got a fantastic opportunity to attract more tourists to our wonderful county as well as get more people out on their bikes.

"It really will be a day to remember and I’m looking forward to welcoming everyone associated with the Tour of Britain to Nottinghamshire in a month’s time. It’s going to be fantastic.”

Ribble Weldtite, one of the leading British teams set to compete in the race, have two local riders hopeful to being selected to compete.

“I cannot wait for it,” said Ollie Peckover, who hails from Ruddington. “It’s always amazing to see how communities come together and line the routes. Last year there were parts of the race where you could barely hear yourself think. Hopefully that will be replicated throughout Nottinghamshire next month!

“I was out watching the race on the roadside when it came the county in 2017 and 2018. Seeing the speed at which they raced was just phenomenal. It was always a dream to race it, and getting that first-hand experience last year was an amazing experience.

“Potentially having an opportunity to race a stage on home roads has been such a motivation for me throughout the 2022 season. I know the roads really well. I’ve learnt the stage route metre-by-metre so I feel like I’m prepared for it!”

His team-mate, Mansfield's Ross Lamb, is also counting down to the event. “I’m super excited,” he said. “I missed the race when it came to Nottinghamshire in 2017 and 2018 as I was racing in Europe. For it to come to my home county when I am able to race in the event is brilliant – it’s been my goal for the year to get selected.

“People still talk about the race’s visit to Mansfield in 2017 and 2018. It’s an event that people base their whole year around. It was massive for the local area.

“The race is a key objective for the Ribble Weldtite Pro Cycling team. It is the biggest race of the season in terms of stature, combined with the fact it is our home tour. The event is a really big deal for our riders, staff and partners. It’s a great shop window for everybody involved.”

A route map and full stage timings are available online at tourofbritain.co.uk/stages/stage-five.

ITV4 will continue to broadcast live flag-to-flag coverage of every stage and nightly highlights show, allowing fans in the UK to watch wherever they are. The race will also be shown in over 150 countries worldwide, thanks to the event's partnerships with Eurosport and the Global Cycling Network.

According to research by Frontline, a roadside crowd of over one million spectators resulted in the Tour of Britain generating £29.96m of net economic benefit for the UK economy.

The County Council’s website has more information about the Nottinghamshire stage of the race and you can sign up for our emailme bulletin to get all the latest Tour of Britain news delivered straight to your inbox.