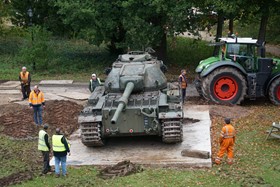 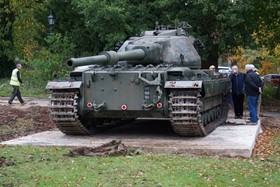 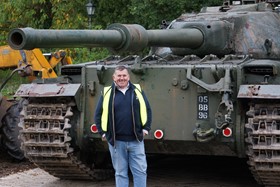 A Nottinghamshire military museum has taken delivery of an iconic British tank as part of a special restoration project.

The Royal Lancers & Nottinghamshire Yeomanry Museum at Thoresby Park, near OIlerton, is the new temporary home of the FV 214 Conqueror – one of the heaviest tanks produced in this country.

It was transported to the attraction from the Bovington Tank Museum in Dorset on Tuesday before a painstaking four-hour operation saw it manoeuvred into place on a specially created concrete plinth.

Now volunteers at the museum will spend the next few months giving the tank – which saw service between 1955 and 1966 – a fresh new look ahead of a special unveiling that is expected to take place next spring.

The Conqueror’s arrival at the museum is also a poignant one as Thoresby was used as a training ground for British Army tanks during the Second World War.

Councillor Keith Girling, who is Nottinghamshire County Council’s Armed Forces Champion and served in the Grenadier Guards for 18 years, joined the crowds to witness the Conqueror’s arrival at the museum.

He said: “Thoresby has a long association with the British tank, and it only seems fitting that a great venue like the Royal Lancers & Nottinghamshire Yeomanry Museum will be home to such a historic and significant exhibit.

“Nottinghamshire is known for being a military-minded county and it was great to see so many people come out in force to see the tank arrive at the museum.

“Thoresby and the museum play a key role in Nottinghamshire’s visitor economy and I’m sure the presence of the FV 214 Conqueror will no doubt prove to be a huge attraction to people coming to our county.

“I’d like to wish the team at the museum good luck with the refurbishment project over the coming months and I look forward to seeing the results of their hard work.”

The 64-tonne FV 214 Conqueror, also known as Tank, Heavy No. 1, 120 mm Gun, Conqueror, was built to counter the Soviet IS-3 series heavy tank during the post-Second World War era of the Cold War.

Around 180 of the tanks were built in total and, during its relatively short service, was used in the then West Germany with the British Army of the Rhine.

Museum curator, Mick Holtby, says he and his team are delighted the iconic tank is now at Thoresby.

He said: “Thoresby was a tank area. Tanks trained here and you can still see the metal roads round the estate, but this is the first time that we’ve had a tank here at Thoresby Courtyard for around 80 years.

“It is going to provide us with a wow factor. Visitors will want to come and see it and that’s why we have put it where we have, because when people come out from the car park they will see it and think ‘wow, that’s a beast’ – and it is a beast.

“A lot of the restoration work will be cosmetic and if we get it looking something like what it did, then we’ll be delighted.”

The Royal Lancers & Nottinghamshire Yeomanry Museum opened in 2011 by Princess Alexandra and attracts thousands of visitors each year.

It is supported by several partners, including the County Council, and is home to a unique collection of arms, uniforms, medals, silver and paintings which illustrate the distinguished role regiments from Nottinghamshire have played in military history.