More than a thousand flock to first-ever Notts Day festival 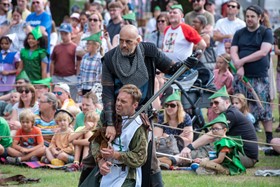 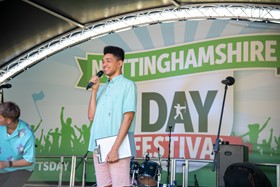 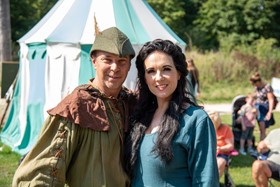 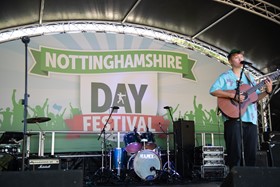 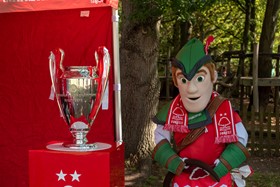 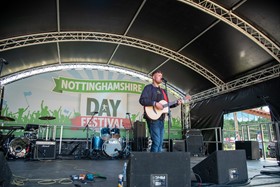 More than a thousand people are estimated to have attended the first-ever Nottinghamshire Day festival at a sun-soaked Sherwood Forest this weekend.

The free-to-attend festival was a celebration of all things Notts and led by Nottinghamshire County Council working with partners such as RSPB, Notts Outdoors and Inspire Youth Arts.

This included the county’s great music, fascinating history, world-famous legends, top sports teams and a reputation for being pioneers in technology and science.

Hosted and headlined by local soul and R&B star Rob Green, the crowds were entertained by a variety of local acts from Southwell’s  Betsey B and Remy CB to Ashley Westlake  and Jess Fisher, both from the Mansfield and Ashfield area.

Other highlights included the exhilarating two-part combat show ‘Lionheart’ where Robin Hood, Lady Marian and their band of outlaws battled against the Sheriff and Prince John.

The show, which was a real crowd pleaser, was put on by Notts Outdoors, the council’s outdoor and environmental education service, in partnership with the Sherwood Outlaws.

Crowds queued to get a selfie with Nottingham Forest’s Robin Hood mascot and the European Cup, which they famously lifted twice in 1979 and 1980.

Displays from the National Civil War Centre showcased  the many aspects of the county’s  history as well as replica ice age artefacts from Creswell Crags.

"We're so proud to have worked with partners to put on the first-ever Nottinghamshire Day Festival and showcase some of the best things about our county.

"It was a great way to kick-start a bank holiday weekend."

Callum Smith, 6 from Arnold, gave the festival a big thumbs up, he said,

“I had my photo taken with the European Cup and I really liked using the virtual reality headsets as well as axe throwing.

“The combat show with Robin Hood and the outlaws was really exciting and I cheered when they beat the baddies."

Clare and Gaz Burdell from Woodborough, visited for the evening, but said they would love to  come again to experience all of the daytime activities too.  Clare said,

“We had a fabulous time. The music was great and the atmosphere was happy and relaxed. It was fantastic to hear from talented local musicians.

“We took our two dogs with us and found the event to be very dog friendly.

“The grounds of Sherwood Forest were beautiful,  and the weather was perfect.

“Well done to all the organisers and performers for putting on this feel-good, family friendly event.”

Martin Brown, who travelled from West Bridgford to attend said,

“It was a lovely event with plenty to see and do, especially if you wanted to learn more about the history and heritage of the county.

“Even better, it was dog-friendly and so we brought the dog along.”

Inspire Youth Arts has worked with a number of the  artists as part of their record label eNGine Room, and on other projects, mentoring them with song writing, music production and recording, performance opportunities and promotional activities, to help them develop as professional artists within the industry.