“Have those difficult conversations” 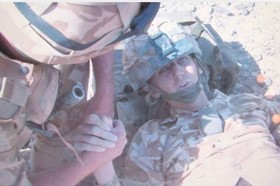 A Nottinghamshire councillor is urging people to talk to their friends, family and colleagues, as he opens up about his own struggles with post traumatic stress disorder (PTSD) and suicidal thoughts.

39 year old Councillor Johno Lee, who represents Balderton, lost a leg in a roadside bomb attack whilst serving with the Yorkshire Regiment in Afghanistan.

He said: “I first suffered with PTSD in 2003 after returning from Iraq. I recovered and went back into the military. Then, in 2007, I had my right leg amputated. I didn’t experience any depression at that stage, but seven or eight years later, I started suffering with heavy symptoms of PTSD.

“Just before the council elections last year, I was out campaigning while I was really poorly. The only way I can describe it is that my brain just clicked.

“One night, at 3am, I was in bed and couldn’t get stuff out of my head and I was crying for no reason. It was like I was in a dream and it didn’t feel like it was real.

“I got out of bed and was about to end my life, but then I started ringing random people. One of them was Keith Girling, a county councillor who had also been in the military. He could tell straight away that it was serious. We spoke for 20 minutes and then he told me to go to his house, where we spoke for a couple of hours. I spoke to a psychiatrist the next day, who I still speak to now.

“I still don’t know why I felt like that. I think maybe it was the stress of the election and it all accumulated and my brain just panicked. The PTSD on top of that made it 10 times worse.

“It’s difficult to ask for help when you need it, as you might not be in the right state of mind. When you get to a certain point, you’ll not notice it. You need friends and family to notice and speak about it. To spot whether someone isn’t eating or sleeping properly or behaving differently to normal and then have those difficult conversations.

“If you do notice things in yourself that are changing, have a chat with somebody. If you feel embarrassed talking to your family, you may find it easier talking to someone you don’t know. There are plenty of support lines available. And if you’ve had something in your life that might make you more prone to it, like a stressful job, just be aware of it.

“Nearly every single man that I know has suffered with some sort of mental health issues. But I’m finding that men are talking more and being honest with each other.”