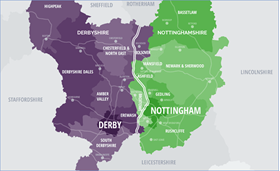 The government has welcomed an initial bid from local council leaders to form an East Midlands Mayoral Combined Authority.

The leaders of the four councils sent initial proposals to negotiate a combined devolution deal in March, after being named as pathfinder areas by the Government in February and being invited to apply for a devolution deal.

If devolution plans are approved, it could mean more money for services in the regions, more major decisions being made locally, nearer the people they affect, and a bigger voice for the region, which is home to 2.2 million people.

The councils are looking for greater funding and autonomy in areas including transport and infrastructure, business growth, inward investment, strategic regeneration, destination management, employment, and skills.

If the proposals are given the green light, the first election for a regional mayor, for Derby, Derbyshire, Nottingham, and Nottinghamshire, could be in May 2024.

“Devolution plans are all about getting a better deal for our area, to help improve things for residents.

“With a population of 2.2 million, a future combined authority will be one of the biggest in the country. It’s time that we got our fair share, so we can deliver better services and better outcomes for the people who live and work in the East Midlands, and improve people’s lives.

“It’s still early days, but the potential benefits could be enormous. This will give us a bigger voice and help us work together to achieve the improvements we all want to see. We’ve had a very positive response from the Government, so we’ll keep working on the details, discussing this, and get the best deal we can, so we can make the most of this opportunity to bring in more funding and more local decision making. It’s really good news.”

Nottingham City Council Leader, Councillor David Mellen, said: “Our devolution plans are about bringing in much needed investment, giving our region a bigger voice, and having more major decisions made locally, nearer to the people they affect. We’re asking for greater autonomy and funding for key areas including public transport, investment for business growth, jobs, skills and training, education and improved environments.

“This is all about getting the best possible deal for Derby, Derbyshire, Nottingham and Nottinghamshire. The East Midlands has long been overlooked in comparison to areas that already have a Combined Authority, such as the West Midlands and Greater Manchester. Public spending per person is lowest in the East Midlands at £12,113, 10% below the UK average. This is our chance to address this, and make the most of this opportunity for the benefit of local people.”

“This is a huge opportunity to level up county areas like Derbyshire and Nottinghamshire that have been underfunded historically, and to bring powers from Whitehall closer to communities.

“The East Midlands has a big opportunity here to put itself on an equal footing to areas like the West Midlands and Greater Manchester, and to bring investment to our counties and cities.”

“The Government’s response has been extremely positive, and welcomed by all of the councils. It’s testament to our collaborative working so far.

“Of course, nothing is agreed yet, but all signs so far are good. The East Midlands has long been overlooked, in comparison to other Combined Authority areas like the West Midlands and Greater Manchester.

“We’re convinced that by leaning on our collective resources we can only improve the efficiency and value for money of services provided for our people.”

The devolution plan does not involve merging or scrapping existing local councils or replacing them. If the deal does go ahead all local councils in Nottingham, Nottinghamshire, Derby and Derbyshire will continue to exist, and will not lose any powers they have now. Local councils would still be responsible for most public services. The mayor would focus on wider issues that span across the area, like transport, regeneration, and employment. The four councils will continue to closely involve district and borough councils in the plan.

The deal would not create a new tier of government. It would move resources and decision-making powers which already exist from London to the East Midlands.

The four councils will continue to work with district and borough councils, businesses, and other stakeholders, to look at details of the plan, which need to be approved by the Government. If a combined authority plan is approved, a devolution agreement could be in place by the end of this year.

Local universities and the East Midlands Chamber of Commerce are backing devolution for the region:

East Midlands Chamber chief executive Scott Knowles said: “Our region is home to a wide range of fantastic businesses, from industrial powerhouses with household names to university spin-outs that boast vast potential, and everything in between.

“What they now need is the political apparatus that removes any obstacles to national and local decision-making, enhances our ability to attract investment and ultimately creates a more business-friendly environment.

“This would help them to take strides forward in productivity and innovation, enabling firms to drive the economic growth that creates jobs and wealth locally.

“For too long, our region has lagged behind when it comes to being backed by central Government, with the East Midlands historically receiving the least funding per head of any UK region.

“What any new political structures will look like ultimately rests with our elected politicians, but businesses are increasingly becoming aware of the benefits of devolved decision-making powers in other regions like the West Midlands, Sheffield City Region and Tees Valley, whose experiences we can learn a lot from.

“For example, the public investment gap per capita between the East and West Midlands grew by 21% in the period since Andy Street was elected Mayor of the West Midlands.

“Our local political system needs to make sure we can address this imbalance and close these funding gaps, enabling us to create new economic opportunities that allow those of us who work, live and play in the East Midlands to prosper.”

“We are delighted that the authorities within the East Midlands are working to secure a deal for a combined authority. This should provide an opportunity to present a compelling case to central government for more levelling up funding that can be spent strategically to improve productivity and the number of highly skilled jobs across the region. It will also enable universities, and other providers of skills, innovation and business support, to work collaboratively with a single group ensuring spend on regional development delivers the best value for money.”

"Nottingham Trent University is focused on reimaging the role of our university within our local communities. We utilise our skills and our resources to create opportunities for economic, social, and cultural development, working in close collaboration with partners across the region.

We are confident that the creation of an East Midlands Mayoral Combined Authority will strengthen these partnerships, broadening the range of areas that are important to local people on which together we can make and implement key decisions.

In particular, NTU will relish the chance to take ever more innovative steps that will transform the provision of skills training for all residents within the Combined Authority. These will improve the financial prospects of individuals, support the economic viability of neighbourhoods, and enable existing and incoming businesses to thrive and grow.”

Professor Shearer West, Vice-Chancellor of the University of Nottingham, said:

“As an institution that is committed to growth, investment, and success for the region that we are proud to call home, the University of Nottingham would be pleased to work with councils and partners across Nottinghamshire and Derbyshire in the creation of the East Midlands Mayoral Combined Authority.

“We are particularly keen to support the research and innovation that leads to economic regeneration and provides the skills and knowledge to help businesses thrive and create the employment that people want and which our region needs.

“The University was pleased to support the application for a devolution deal for the East Midlands, with a significant contribution from our Honorary Professor of Economics, Andy Haldane, and looks forward to working with all levels of government to improve the lives of all communities in our region.

"A new combined authority for the East Midlands would strengthen the work which is already taking place between the public, private and higher education sectors, so that we can better work together to improve things for everyone who lives and works in the East Midlands.“