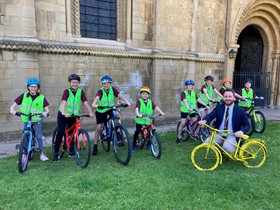 Communities are being urged to get involved in this year’s Tour of Britain to ‘showcase what our great county has to offer’ ahead of the eagerly anticipated return of the world-famous race to Nottinghamshire.

The 190-kilometre (around 118 miles) fifth stage of the showpiece event takes place on Thursday 8 September and will start in West Bridgford before finishing in Mansfield.

It is the third time the Tour has come to Nottinghamshire and the stage will pass by some of the county’s most iconic landmarks and tourist attractions, including Southwell Minster, Clumber Park and Sherwood Forest.

Now a detailed interactive map has been released which highlights the streets and neighbourhoods the world class field will race along and through – giving residents, schools, landowners, and businesses the perfect opportunity to start planning for the big day.

They will be encouraged to take part in a host of events to welcome the event to Robin Hood Country, which in 2018 attracted 250,000 spectators and made it the largest free-to-attend sporting event in Nottinghamshire’s history.

Once again, communities are urged to embrace the international event by transforming their towns and villages with bunting, flags, yellow bikes, and creative displays to celebrate the sporting spectacular as it passes through our county.

Landowners can also get into the spirit of the Tour by taking part in a national land art competition, to turn fields, hills, gardens, or any open spaces into unusual art displays.

The tradition of creating huge pieces of art visible from above for television cameras during bike races has long been celebrated and race organisers have again launched a competition to find the most eye-catching.

And with 75 days to go until the start of the race, a special celebration event was held at Southwell Minster on Tuesday – attended by a group of youngsters from Lowes Wong Junior School, who took part in a mini-Bikeability session organised by Via East Midlands to promote cycle safety for children – to kick-start a summer extravaganza of cycling.

Councillor Tom Smith, Nottinghamshire County Council’s Deputy Cabinet Member for Communities, said: “The return of the Tour of Britain to Nottinghamshire is a great opportunity for communities to come together and show their support for what is a truly global sporting event which will once again put us on the international map.

“On the two previous occasions we’ve hosted the race, we had so many examples of land art creations by schools, community groups and landowners which were highlighted by Tour organisers for inspiring them to encourage people across the route to show their support and get creative.

“Who can forget the iconic image of a bicycle made of sheep feeding created by Nottinghamshire farmer Des Allen during the 2017 stage, footage which subsequently went viral on social media.

“So, with a global TV audience of millions and the eyes of the world on Nottinghamshire again this year, let’s get creative and help make it a sporting extravaganza to remember and showcase what our great county has to offer.”

Via East Midlands, which manages highways services on behalf of the county council, delivers the Bikeability scheme to provide cycle training tips for young people in schools across Nottinghamshire.

Tracy Graham - Via East Midlands Road Safety Manager, who accompanied the pupils at Tuesday’s mini training session - said the Tour coming to Nottinghamshire in previous years led to a spike in interest in Bikeability courses and cycling in general.

She said: “It’s amazing that it’s coming through Nottinghamshire again. Our instructors are all looking forward to it and we just want all the schools to engage with us to help to make it an event to remember.

“When it came before it provided us with a fantastic opportunity to showcase cycle training and what it left us with was a thirst for all types of courses for Bikeability.

“There were families and commuters wanting to access cycle training. Many people had a new interest and a new-found love of cycle paths, cycle lanes and going out on the road.

“There was a lot more interest, as we saw in schools for Bikeability, and we want that to continue.”

The county council’s website has more information about the Nottinghamshire stage of the Tour of Britain, including details about our schools pack and the competitions we are running.

You can sign up for our emailme bulletin to get all the latest Tour of Britain news delivered straight to your inbox.