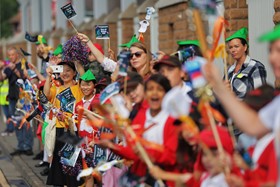 The return of the world-famous AJ Bell Tour of Britain to Nottinghamshire in September boosted the local economy by more than £4 million and attracted nearly a quarter-of-a-million spectators.

The race returned to Nottinghamshire for the first time in four years when the fifth stage from West Bridgford to Mansfield took place on Thursday 8 September.

Sadly, the stage proved to be the final leg of this year’s tour as the three remaining stages were cancelled due to the passing of Her Majesty Queen Elizabeth II.

However, the report shows that in Nottinghamshire:

Figures also reveal that the average daily spend for day visitors per group was more than £48, while overnight visitors spent more than £135.

News of the financial boon for Nottinghamshire comes after event organisers had praised fans for creating a ‘truly unforgettable’ atmosphere along the route – hailing them as the ‘best of this year’s race’.

Councillor Ben Bradley MP, Leader of Nottinghamshire County Council, said the Tour of Britain’s return to the county for the first time since 2018 had proved to be a huge success.

He said: “These figures once again highlight how Nottinghamshire can successfully host an international event of this magnitude as well as being a tourist destination which people want to visit and return to in future.

“We all know that Nottinghamshire is a fantastic place to live, work and visit, but it is always nice to hear this view confirmed by people from outside the county who have perhaps never visited here before.

“The findings really are the icing on the cake after what was truly a stage to remember – especially for the fans who travelled here in their thousands to watch the race pass through our county.

“Hopefully the AJ Bell Tour of Britain will make a return here for a fourth time in the future, not only because of the financial benefits it brings, but so we can once again showcase everything our wonderful towns and villages have to offer to a wider audience.”

Rushcliffe Borough Council’s Cabinet Portfolio Holder for Communities and Climate Change Councillor Abby Brennan said: “The fifth stage of The AJ Bell Tour of Britain was a huge success and we had the privilege of hosting the start of the race in West Bridgford, racing through many other villages and towns across Rushcliffe.

“The figures speak for themselves, the economic benefit to local businesses in West Bridgford and all of our communities was one of the key reasons we looked to secure the Tour of Britain with partners.

"Leading up to the race it was great to see local businesses, schools and communities embracing the event, preparing to welcome and cheer on the cyclists. There was also a fantastic atmosphere on the day with visitors joining the fun and spending time and money here in the Borough.

“The legacy of attracting international events like this is not just the economic benefit it also helps inspire more people to become physically active and to encourage the next generation of athletes in Rushcliffe to be the best they can at their chosen sport.”

Mansfield Executive Mayor Andy Abrahams said: "This is a fantastic boost for the district. It showed Mansfield at its best and demonstrated our ability to host major international events such as this.

"We look forward to hosting more of these kinds of prestigious events in the future in this area as a way of regenerating our local economy and showing the wider world what we know already - that Mansfield is a great destination, and that we are ambitious and open for business.

"I hope local people feel the same sense of pride that I feel about how the community came together.

"After their previous positive experience of working with the council, the race organisers were willing to extend the number of miles the route took in Mansfield so that more parts of the district were able to join in.

"I would like to extend a huge thank you to the communities of Warsop, Mansfield Woodhouse and Forest Town for their support in the build-up to the race and their enthusiastic cheer point events and activities on the day - we could not have done it without them."

Councillor David Lloyd, Leader of Newark and Sherwood District Council, said: “Residents in our rural towns and villages in Southwell and Edwinstowe enjoyed a fantastic day of fast paced cycling as the country’s best cyclists took to the streets of their communities.

“Not only did the Tour help boost business in those areas, but for our communities, it was much more about the social impact with the next generation of budding cycling enthusiasts being inspired by the UK’s greatest cyclists racing in their hometown.

“The Tour of Britain was part of many cycling activities we saw in the district during the summer, the Newark Town Cycle race created a great atmosphere in our town centre and we also installed Brompton Bike hubs across Newark with more coming soon.

“This is all taking forward what we said we’d be doing following on from surveys where our residents told us they wanted us to encourage more cycling in the district.

“We hope that the exciting summer of cycling events persuaded more residents to swap out four wheels for two.”

Councillor James Naish, Leader of Bassetlaw District Council, said: “We were thrilled to once again be part of the Tour of Britain and contribute to what was an extremely successful and popular event across Nottinghamshire.

"Bassetlaw has directly felt the positive economic impact of the Tour, and enjoyed the opportunity to showcase its towns and villages to both a global audience and visitors on our doorstep.

“Our region has a proud history and a passion for cycling, as was shown by the number of spectators who lined the route and the dedicated volunteers who helped to make this world-class event happen. We will always give the Tour of Britain and all of the competitors, teams and visiting spectators a warm welcome, whenever it returns to the District.”

In addition to the Nottinghamshire stage being hailed by organisers for its atmosphere, the county also enjoyed success in the Tour’s land art competition with Keyworth scooping the national award for its eye-catching hedgehog highway-themed design - captured from the air by ITV4’s cameras as the event passed through the village.