‘A milestone moment’ for new homes and jobs in Notts 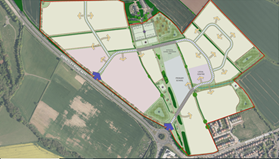 Major plans for a proposed new village near Hucknall have moved a step closer to reality today with the official appointment of a new housing developer.

Vistry Partnerships will now take on the building of approx. 800 homes at the planned new village at Top Wighay, as part of a multi-million pound agreement and one of the biggest ever development contracts for Nottinghamshire  County Council*

The planned new sustainable community also aims to create more than 1,000 new full-time jobs, as well as a new primary school, a local commercial centre and green spaces across the 40.3 hectare  site.

It is estimated the new village will boost the economy by more than £873 million over a decade.**

The appointment of Vistry Partnerships was rubber-stamped at today’s Economic Development and Asset Management Committee.  They will work closely with the council on the building of the new sustainable homes and green spaces , as well as engaging  with the local community to help keep them updated as plans progress.

“We are delighted with the appointment of  Vistry Partnerships as it brings the new village a step closer to reality.

“This is a milestone moment.  This flapship development, led by Nottinghamshire County Council,  will benefit generations to come  with the  promise of much-needed new  housing,  new jobs  and skills to boost our economy.

“This really is the best possible use for this County Council-owned land, which already has outline planning permission, as we look to create more quality, sustainable  housing to meet the needs of our growing population.

“These new homes will provide a place for families to create memories and help them build a future here.

"Lucrative contract opportunities for local subcontractors will be another benefit.

“One of the key aims of this planned new community is for it to be as green as possible so as well as having  greener homes, we want to encourage  greener travel,  as we look to help meet the UK’s  net-zero targets.

“Footpaths, cycling routes and traffic calming measures are at the heart of plans and the site is already near to an existing bus route.  New bus stops are also proposed.

“As well as being close to the M1, Hucknall is well served by tram and rail, with existing links to Nottingham,  Derby,  Mansfield and Chesterfield.”

Completed infrastructure work at the site includes an expanded roundabout on the A611/Annesley Road, a new signal-controlled junction as well as a new, three-metre wide, shared use footway/cycle lane along the northern side of the A611 north of Hucknall and to the west of Linby. This work has already help limit the impact of traffic on nearby towns and villages.


*Due to commercial sensitivities, the exact cost of this land sale for this housing development isn’t publicly available at this stage

** Research suggests the development will generate £870m for the economy over a period of a decade. Source: Economic Benefits Report January 2020 produced by Pegasus Group.