The full Colliery Way network is now open to traffic.

The new 3.8km single carriageway road provides a link between the B684 Mapperley Plains and the A612 Trent Valley Road/Nottingham Road.

As part of the full opening, upgrades have been made to the Mapperley Plains / Gedling Road / Plains Road / Arnold Lane junction and resurfacing works have taken place in the following areas:

Will any other works be taking place?

Due to planting seasons, road users may notice further landscaping works being undertaken in the Autumn. These will not affect the traffic network.

There are also some minor ongoing works to boundary treatments along Colliery Way. In addition, we are looking at some additional signage and lining along the route and wider network following feedback received from key stakeholders.

Enforcement of the weight restriction

We are in the process of installing more signage on the wider Colliery Way network to remind drivers of HGVs about the 7.5 tonne weight restriction which is in place on Shearing Hill and Arnold Lane.

Over the next few weeks, our Trading Standards Team will be carrying out a number of enforcement visits in the area.

HGVs are able to drive into the weight restricted zone if accessing premises. 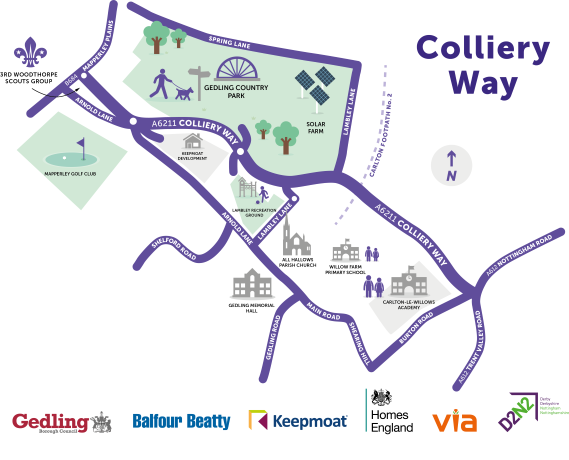 As part of the ceremony, the Chairman and Year 7 pupils planted a sapling of the Major Oak from Sherwood Forest down at the Burton Road end of Colliery Way.

Local residents then had the opportunity to walk and cycle the route before it officially opened to traffic at midday on 22 March.