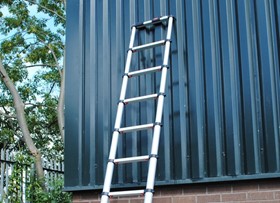 Nottinghamshire DIY enthusiasts, tradesmen and gardeners are being warned by the County Council’s Trading Standards team to check telescopic ladders thoroughly and use them with care after investigations led to over 32,000 dangerous sets being subject to recall or withdrawal from sale.

Telescopic ladders have become increasingly popular in recent years because they fold away and can be easily stored. However, their operation can require multiple locking mechanisms and just one faulty part or damage can lead to the ladder collapsing.

In total 13 different telescopic ladder types have been tested by the four authorities. All failed to meet relevant parts of British Standard for ladder design, safety and structural requirements.

Almost all of the ladders were easily damaged during testing, suggesting many similar products available to consumers are not robust enough to cope with normal wear and tear.

In the worst case, a ladder snapped in half beneath the test load − despite claiming to comply with the standard.

Importing companies have taken action to withdraw from sale or recall over 32,000 ladders as a result of investigations following the Trading Standards East Midlands checks.

Councillor Gordon Wheeler, Vice-Chairman of Nottinghamshire County Council’s Community and Place Committee, said: “If you own a telescopic ladder we urge people to use with caution, making sure each locking mechanism is working before climbing the rungs, and avoid using if any damage is evident.

“Summer is a key time when people get their ladder out for gardening or outside house maintenance so if you have doubts about your telescopic ladder contact the supplier or check the new guidance from the UK Ladder Association, which is giving additional safety advice.”

Eleven of the 13 ladders tested were confirmed as being manufactured in China and most were bought online.

The importer of the ladder that snapped in testing was prosecuted and fined a total of £10,000 and ordered to pay £2,000 costs in November 2016 after admitting selling an unsafe product and which falsely claimed to meet the relevant standard.

Nottinghamshire residents with concerns should contact the County Council’s Trading Standards team via the Citizens Advice Consumer Service on 03454 040506.