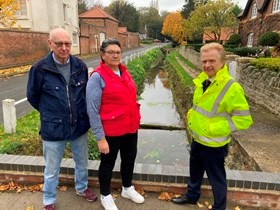 Teams of volunteers are playing a crucial role in helping to protect communities across Nottinghamshire which are at risk from flooding.

Flood wardens work in partnership with Lead Local Flood Authority Nottinghamshire County Council and partner agencies to manage flood risk and resilience measures – and are trained to respond to an expected flood as well as making their neighbourhoods aware of emerging issues as and when they happen.

There are currently 38 communities across Nottinghamshire with established flood warden schemes, with many set up in response to major flooding events in 2007 and 2013.

One successful flood warden scheme is in Thurgarton, where volunteers have worked tirelessly to protect the picturesque village since 2013 when four inches of rain fell in just an hour – leading to the flooding of several properties.

The village’s scheme is one of the largest in Nottinghamshire, with 28 members, and is overseen by Thurgarton Parish Council and supported by the County Council and Environment Agency.

Flooding is mainly concentrated on Beck Street where a beck snakes through the village and floods ‘six or seven’ times a year – often leading to floodwater coming over the beck and onto the road and nearby Main Street.

However, since the devastating floods of 2007 and, more recently 2013, the wardens have taken proactive measures to help protect properties.

One of the first steps the group took was to install a monitor in the beck to measure water levels, which is linked to the village website, while email and SMS services were introduced to keep villagers updated during an emergency.

Tina Tsoukatos, Chair of the Parish Council and a member of the warden scheme, said: “The beck monitor has been a huge help. We’ve got triggers to say when the road closure scheme comes into operation – which is all part of the contract with the County Council. So, we’ve got people looking for those triggers.

“Different areas of the village are looked after by different coordinators. They have set up WhatsApp groups so they can quickly let people know in their area if there’s a problem.”

Several homeowners have also fitted property flood resilience measures such as flood doors, gates and boundary protection to keep floodwater from their homes – while the Trent Valley Internal Drainage Board (IDB) has also ensured the beck is maintained so it operates as effectively as possible.

The County Council has played a key role in delivering regular training for the wardens – providing guidance with initiating road closures during flooding, water awareness and risk control.

Tina added: “We’ve got a good working relationship with the County Council.

“For instance, on the road closure side of things we’ve had a full set of kit provided by the County Council along with the suitable training for where it should be and how the signage should be handled.

“And as for the flood warden scheme, we’ve also had regular training. Every couple of years there are training courses that we go on – it’s all the support and training that we have needed.”

There are currently 85,000 properties estimated as being at risk of flooding in Nottinghamshire and more than 1,300 localised reports of flooding have been investigated in the last 18 months.

The County Council is committed to reducing the risk of flooding and works with communities by aiming to educate, support, influence and empower.

As well as the flood warden schemes, there are seven active Nottinghamshire County Council Community Flood Signage Schemes in operation and another three being developed.

Flood wardens participate in these schemes and training is provided by the County Council’s Emergency Planning Team and its road contractor Via, as well as Nottinghamshire Fire and Rescue Service.

Tina continued: “I would recommend the flood warden scheme to any village that is under threat of either flood or emergency of any description.

“It means that we can now sleep at night, whereas before if it was raining hard, you’d be in and out of the house to check on the water levels.

“It’s certainly heightened the level of resilience for the village. We don’t feel like it’s every man for himself anymore, which it was beforehand.

“We’ve got processes and procedures in place and people know what they’ve got to do and we’re happy to be directed by those around us. It works and there’s a lot of goodwill involved.”

Meanwhile, Trent Valley IDB is leading on a flood alleviation proposal for Thurgarton with support from the County Council.

Tina said: “We have tried to become as resilient as we can but what we really need is a flood mitigation solution, and I’ve been working with the IDB for over eight years now to find the right solution at the right cost.

“I’m hoping that what they’re telling me will happen, which is that some sort of solution will be put in place next spring. That will make a massive difference to this village.”

Councillor Neil Clarke MBE, chairman of the County Council’s Transport and Environment Committee, said he was impressed with the work being carried out by the Thurgarton Flood Warden Scheme.

He said: “I was delighted to meet Tina Tsoukatos and her colleague Charles Day to hear about the exceptional work they and the wardens in Thurgarton are doing to manage flood risk in their village.

“They obviously can’t stop the flooding, but they are doing a fantastic job in helping to react to an event and protect residents, some of whom are vulnerable, and their neighbours.

“A key part of partnership work like this is working together and our officers in the Flood Risk Management Team are doing a great job in bringing people together, so that we can all contribute to efforts to try to alleviate the impacts of flooding as much as we can.

“I would like to encourage anyone who lives in an area where flooding is an issue to contact the County Council to find out more about how they can set up a flood warden scheme in their community, so we can work with each other to manage flood risk in our towns and villages.”

The work of the flood wardens being highlighted also coincides with Flood Action Week, which runs from Monday 22 November until Monday 29 November, and this year is centred on helping people know what action to take in a flood.