Pupils delighted with their new £6.3m school in Bestwood Village 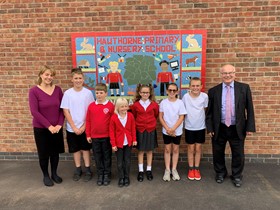 The school dinners, the big classrooms and the rolling green fields outside are just some of the things the pupils at Hawthorne Primary School are loving about their new £6.3m school.

The 420-place capacity school, which also has a 39-place nursery on site, is one of several new schools that has seen a multi-million-pound investment from Nottinghamshire County Council.

Nine-year-old Megan said: “I absolutely love my new school. The dinner ladies are so friendly, and I love the school dinners, especially the sausages and flapjacks.

Jack, 8, said: “The classrooms are big, and we have huge windows, so we can see the pigs, cows and sheep outside. Our old school was quite small, so we have so much more space to run around in, my friends and I have had lots of fun already.”

Councillor Philip Owen, the county council’s chairman of Children and Young People’s committee, said the school was much needed in the area and he was delighted that the pupils had given it the thumbs up.

Councillor Owen added: “Making Nottinghamshire a great place to raise a family is a top priority for this council, and by investing in new schools we are investing in our children’s future.”

Head teacher Rachel Jarvis thanked everyone involved with getting the school ready for the new academic year.

“The staff, pupils and parents are over the moon with the school and we are now looking forward to a busy autumn both inside and outside the classroom.”