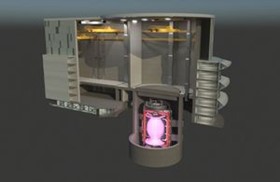 An  existing coal-fired power station in Nottinghamshire has made the shortlist of what is hoped to be the world’s first prototype fusion energy plant.

Part of the site at Ratcliffe-on-Soar has  made it to the final five as part of a national search for potential locations by the government for alternative energy plants, with the  final decision due to be announced  in late 2022.

The UK Government is bidding to be the first to develop a commercial power station that will use the energy produced by fusion reactions to generate electricity. Fusion offers an inherently safe and virtually limitless source of clean electricity by copying the processes that power the sun.

The ambitious project  -  Spherical Tokamak for Energy Production - known as STEP, is being led by the UK Atomic Energy Authority (UKAEA).

The authority announced today ( Thursday 14 October )  that part of the Ratcliffe-on-Soar power station site will now progress to the final stage of assessment and  has the potential to host the fusion power station, aimed to be built by 2040.

West Burton A, near Retford,  which was also being considered as part of the 15-strong long-list, announced earlier this summer, has made the reserve list.  Although it won't be immediately assessed alongside the shortlisted sites, it will be brought into the process by the end of this year if any of the five sites fall out of the process.


Nottinghamshire County Council coordinated  this nomination process for the county working with several partners, including the landowners of these sites as well as Rushcliffe Borough Council and Bassetlaw District Council.

“For a Nottinghamshire  site to get down to the final five is incredible. We are another step closer to this being a reality.

“Achieving STEP would bring massive  benefits to the county, putting it at the heart of the government’s plans to revolutionise the way we generate energy in the UK.

“It would build on the existing strengths of our universities and manufacturing sectors, but would also create new skills, training, and thousands of highly skilled jobs, attracting investment and delivering  amazing overall benefits to our regional economy including the lucrative opportunities for the local supply chain to help construct the plant.

“While it would have been phenomenal  to have two sites in the final five, the benefits will be felt across the whole  county, should we be successful.  It is also encouraging that West Burton A is the only site to be kept on as a reserve,  which shows the strength of its bid.

“We are an ambitious county and have a proud heritage of producing energy which helped power the industrial revolution, but looking to the future, we want to be at the heart of the UK green energy revolution

“As global energy demand continues to grow, this technology is expected to play a crucial role in helping to achieve net zero emissions - in a safe and sustainable way - during the second half of this century.”

“This is an important step forward in the process to find a home for STEP somewhere in the UK. We were pleased to receive a number of really good nominations during the open call for sites at the beginning of the year, including both Ratcliffe-on-Soar and West Burton A.

“The nomination of the Ratcliffe on Soar site for STEP had the full support of the Borough Council and so we are very pleased that it has got through the next stage of the assessment process and on the short list.

“Securing the best future use for the site is a priority and STEP, along with plans for a Development Corporation and Freeport, provides an incredible opportunity to have a world leading development in Rushcliffe which will bring many significant benefits for our communities and businesses. We look forward to working with our partners and UKAEA to progress the site through the next stage in the process.”

UKAEA plan to start working with the shortlisted sites and local communities to gain a more in-depth understanding of the socio-economic, commercial and technical conditions associated with each site before we make our final recommendations to the Secretary of State in 2022.

UK Atomic Energy Authority (UKAEA) will be responsible for all aspects of the development, consenting, construction and operation of the proposed facility.