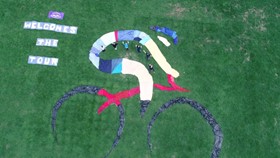 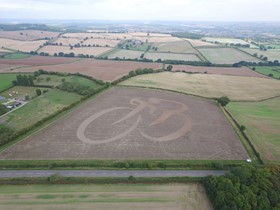 Pupils of Brookside Primary School in East Leake came second place for their eye-catching and colourful giant bike and rider display on the school playing fields, meanwhile John & Cathy Charles-Jones of Woodborough Park Farm scooped the second runner-up spot for their  impressive computer-aided design to create a giant replica of the Tour of Britain logo

Over 50 entries from across the eight stages were received, with more than half of the entries from Nottinghamshire, which hosted stage seven of the race on Saturday 8 September.

“The Tour was a great way of bringing the community together, for the children to be involved as one in creating art, being involved in physical activity and embracing a sport that was new to many of them.”

“Having the Tour of Britain passing the farm gave us a wonderful opportunity to show in Nottinghamshire’s keen support for the race, while also showcasing precision agriculture. For what started off as a bit of fun, we are taken aback by becoming runner-up in the Land Art competition.”


Councillor Kay Cutts MBE, Leader of Nottinghamshire County Council, congratulated the two local runners up. She said,
“Nottinghamshire hosted the longest stage this year and certainly looked wonderful from the air thanks to all the impressive creations along the 215km route. Many congratulations go to the pupils at Brookside Primary School and to John and Cathy Charles-John for their imagination, hard work and flair, which certainly caught the eye of the national judges!
“The number of local communities and residents that were inspired to create landart was just tremendous. While it is of course disappointing that the overall winner wasn’t from Nottinghamshire, I’m very proud that our county submitted the most number of entries.  Tour organisers also praised Nottinghamshire to the hilt for the high standard of landart across stage seven, which our county hosted with great aplomb.
“And I look forward to the Tour coming to Nottinghamshire again in future years. ”

“The creativity and response to our first National Land Art competition has been quite something.

“It is clear that everybody who entered spent a lot of time designing, planning and creating their land art. That two Nottinghamshire entries were recognised as runners-up further outlines the incredible support and community spirit that was on show when the race visited on Saturday 8 September. "

The overall winner were South Molton farmers from Devon. They created a giant work of art, stretching more than 45 metres in width, featured alongside the route of Stage Two. It comprised of nineteen tractors, sixteen all-terrain vehicles, a 13-tonne excavator and one slurry tanker wrapped in plastic.