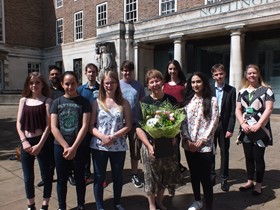 Nottinghamshire's new members of Youth Parliament have been elected and are ready to give a voice to young people across the county.

Encouraging more opportunities for young people in local communities and highlighting mental health issues are just some of the shared interests of group members.

Almost 10,000 votes were cast for 49 candidates across Nottinghamshire this year.

Councillor Cutts said: “Many congratulations to everyone who has been elected – they can be rightly proud of this significant achievement. We wish them every success as they begin their important work to represent young people in our neighbourhoods and local communities.”

The county council's youth service will support the team during their two year term in office.

The elected members for Nottinghamshire are:

In the past two years, one million young people have voted in UK Youth Parliament elections.

A key area of work for all members of Youth Parliament will be the 'Make Your Mark' campaign - a ballot formed by the UK Youth Parliament for young people to highlight important issues and topics - which then form the basis for national campaigns.

Make Your Mark is the largest consultation of young people in the UK. Every 11-18 year old in the UK is eligible to vote in MYM. Last year Nottinghamshire’s members of Youth Parliament supported over 12,000 young people in having a say on the things that matter to young people.

The teenagers are excited about their new role.

Jack Heald, aged 15, from Kirton, is a student at Dukeries Academy and said: "I'm interested in politics and am very pleased to be involved. I am keen to promote the positive image of young people and increase youth participation at events in local communities through publicity and other activities."

Jack is particularly keen to see more young people attend District Youth Forums in local communities and he attends a monthly session in Hawtonville in Newark.

Sikander Khan, 17, from Kirklington, is looking forward to promoting the Make Your Mark campaign and said: "I want to challenge the negative stigma around mental health issues and reduce bullying of all types, as well as encouraging and educating more young people about politics."

Ranea Saad, 16, from Stapleford, said: "I campaigned for promoting healthy lifestyles and healthy food choices among young people, highlighting discrimination and raising awareness of mental health issues. I am looking forward to helping other young people."

Sophie Whitby, 13, from Mansfield Woodhouse, attends My Place young people's centre in Mansfield and said: "I am keen to promote equality for groups such as the LGBT community and I cannot wait to put my ideas into practice."

Sami Ayoub, 16, is from Beeston, and attends Nottingham Emmanuel School and will soon be studying at The Beckett School. He said: “I am very pleased to be re-elected and aim to use the skills and knowledge I gained from last time – politics is one of my hobbies and I am looking forward to the next two years.”