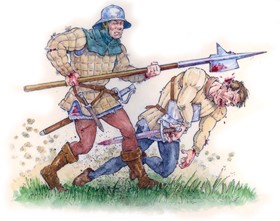 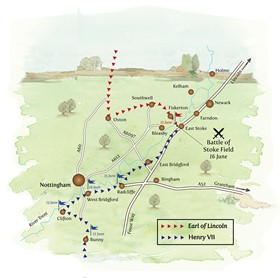 The year is 1487. The sun glints off the armour of 7,000 dead soldiers that lay strewn across the battlefield and the nearby River Trent runs red with their blood... but this isn’t Bosworth or Hastings, it’s a forgotten field in Nottinghamshire.

Nowadays Stoke Field Battlefield, just outside Newark, is just an empty field but is the location of the last battle of the infamous Wars of the Roses. Now the scene of this bloody conflict, which rewrote the history books, is being brought back to life in a joint project between Nottinghamshire County Council and the Battlefields Trust.

A new history trail, featuring five oak panels which describe the background to the battle, the bloody events of the day and the aftermath, will bring the fascinating untold story of this bloody battle to a new audience.

Visitors will also be able to travel back in time by downloading videos, starring re-enactors in full historical costume, who tell the harrowing, first-hand accounts of the people who were actually there and experienced the battle. Further information about the trail, including the videos, is available from www.nottinghamshire.gov.uk/BattleofStokeField

The Battle of Stoke Field on 16 June 1487 was the last major engagement of the Wars of the Roses (1455 to 1487), between contenders for the throne of England from the houses of Lancaster (red rose) and York (white rose).

The Battle of Bosworth Field, two years earlier, had established King Henry VII on the throne, ending the last period of Yorkist rule and initiating that of the Tudors. But the Battle of Stoke Field was the final, decisive engagement in the subsequent, ill-fated attempt by leading Yorkists to unseat him in favour of the pretender, Lambert Simnel.

It’s believed the battle may have been slightly larger than Bosworth, with much heavier casualties, possibly because of the terrain which forced the two sides into close, attritional combat.

In the end, though, Henry's victory at the Battle of Stoke Field was crushing and decisive, with almost all the leading Yorkists being killed.

Further information about the battle is available from the UK Battlefields Trust Resource Centre.

Kevin Winter from the Battlefields Trust (East Midlands Branch) said "In 1987 there was a major re-enactment and battlefield trail created, but the information panels were long ago moved into the bell tower of St Oswald's Church. We have had a long term aim to install new panels that will inform people about the events that happened on the ground they are walking on. Thanks to our partnership with the County Council and in particular Laura Simpson we can now realise that aim. We also need to thank the local landowners for their permission to erect the panels and urge visitors to respect the fact that much of the trail is across private land."

Laura Simpson, Heritage Tourism Officer at Nottinghamshire County Council said “This battlefield deserves to be remembered as a piece of local history that has national significance and as the final resting place of thousands of people who gave their lives for their cause. Had the battle gone the other way, our nation’s history would have been very different”.

Councillor John Cottee, Chairman of Nottinghamshire County Council’s Communities and Place Committee, added: “We are delighted that this project will recognise our county’s only registered battlefield. Our heritage is important to us and our sense of place. The Battle of Stoke Field history trail project aligns perfectly with the County Council’s aspirations to make more of Nottinghamshire’s heritage and tourism offer.

"Tourism is one of the fastest growing sectors and contributes £1.8 billion per year to our local economy. Visitors will be encouraged to visit our area, stay longer and enjoy our sites and scenery which all play a part in telling the story of who we are and the role Nottinghamshire has played in shaping the history of our nation.”

The Chairman of Nottinghamshire County Council, Councillor Mrs Sue Saddington will attend a special event to launch the new history trail on Saturday 16 June. This event will take place exactly 531 years to the day that the battle happened and will feature a gunpowder salute from re-enactment group, the Beaufort Companye.