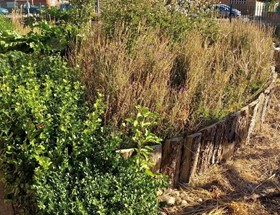 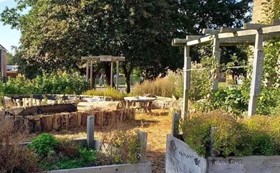 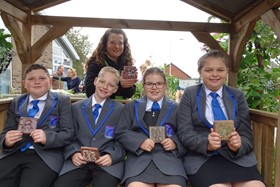 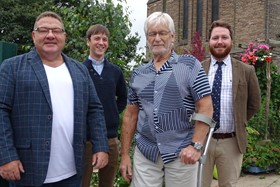 A small team of dedicated volunteers have been praised for working tirelessly to create a ‘fantastic’ new community garden in the grounds of a Nottinghamshire church.

They have transformed an overgrown area of land at St Paulinus’ Church in New Ollerton into a blooming wonderful green space of nature featuring a variety of plants and flowers, herbs, seating, and a water feature.

Now the fruits of their labour can be enjoyed by the whole community, with the garden a place for people to simply enjoy, meet friends, grow their own produce and hold small events such as fayres and celebrations – a far cry from what it looked like little more than two years ago when community stalwart John Pearson launched the project.

Nottinghamshire County Council has contributed £1,700 from its Local Improvement Scheme towards the project, with funding also coming from a variety of individuals and organisations – including the Unite Community Union, Newark & Sherwood District Council, Edwinstowe and the Dukeries Lions Club, the Rotary Club of Sherwood and the Freemasons of Bassetlaw.

To date, £8,000 has been donated to cover the costs of creating the garden – while the group has also received hundreds of plants from kind-hearted residents.

Councillor Tom Smith, Vice-Chairman of the County Council’s Communities Committee which approved the LIS funding, attended a special opening event for the garden and paid tribute to John and his team of volunteers for their work to transform the green space.

He said: “Firstly, I am especially proud that funding from our Local Improvement Scheme has helped John Pearson and the volunteers to create such a wonderful community space.

“The garden looks absolutely fantastic and the tremendous work carried out by John and his team means residents now have somewhere to go and enjoy, while it also provides a social opportunity to build a sense of community and belonging.

“It is projects like this which the scheme is in place for and I hope the garden will be enjoyed by members of the local community for many years to come.”

Students from the town’s Dukeries Academy have also been involved in the project, while schoolchildren from the Parkgate Academy made mosaic tiles for the garden – which was blessed by the Rev Richard Hanford, the new priest-in-charge of the Parish of Ollerton with Boughton, at a special ceremony on Saturday, 4 September.

The garden is also home to the ‘Bassetlaw Birch’ in recognition of the efforts of NHS workers during the pandemic, while the group is working with mental health charity Nottinghamshire MIND to expand the garden and provide a ‘listening ear’ space for anybody who needs professional help.

And John revealed how he and the volunteers were not deterred by the difficulties posed by the Covid-19 crisis to create the garden.

He said: “We had grass six-foot high when we first started. It was an abandoned vegetable plot, basically, and it’s taken two-and-a-half years to come to fruition.

“We struggled through the restrictions, isolations, lockdowns and it hasn’t been without its costs health-wise, so it’s been a hard task, but we’ve enjoyed every single second and the results are here for everybody to see.

“A lot of people are simply overwhelmed by how it looks from what it was just a month ago because everything had died back, and it’s started to come through again for autumn.

“It’s not a big space but it’s a friendly space and it’s quiet and it’s peaceful – and people like that. It’s somewhere where they can come and, as we keep saying, just be yourself.

“The other day a lady was sat on one of the arbours, which the LIS funding went towards, and she was reading a book with a flask of tea – and that’s what the garden is all about, to just come in and enjoy it for what it is.”

Cllr Mike Pringle, ward member for Ollerton at the county council, said the new community garden was a place for everybody to enjoy and hailed John for his devotion to the cause.

He said: “The community garden, which has been created by John Pearson, is just a fantastic place for people to come and talk.

“John has opened it for everybody. It matters not whether you’re churchgoing or not, the garden is open for anybody to come and relax.

“It even has an area for people that need to talk outside of the home environment, so that they have a safe place to come and talk with whoever they want to talk to – professional or not – just to offload.

“John, himself, is an incredible human being and throughout the pandemic has done brilliantly at bringing this all together for us.”