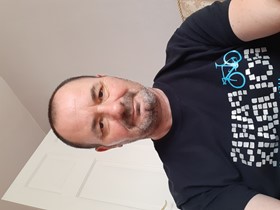 A man who is four years sober is urging others with a drinking problem to seek help at the earliest opportunity this Alcohol Awareness Week (15 – 21 November).

Pete Connelly, who is 56, originally came from Manchester and said that drinking was just part of his culture growing up.

“I’d have a couple of bottles of cider before a disco on a Saturday night. I thought I was a heavy drinker, but I didn’t think I had a problem. I worked for a couple of years on night shifts so I could manage work and drink, as long as I didn’t have to get up in the morning. I managed for around 25 years before it got a total grip on me.”

Pete realised he needed to do something about his drinking when he went into a pub one day and picked up his pint off the bar, but he had to use two hands because he was shaking so much.

He had two failed attempts at detoxing in Manchester before moving to Hucknall in May 2017. He received support from CGL, which Nottinghamshire County Council commissions to provide free drug and alcohol support services.

Pete said: “CGL helped me learn from my previous mistakes and look at my trigger points and cravings. Up to now, it’s worked brilliantly and I’ve not touched a single drop of alcohol for four years.

“Now I take walks and I think about things before I do them. If I have one or two drinks, it could be a year until I stop again. That’s what CGL have taught me – there are consequences to my actions. Whatever problems I’ve got are still going to be there the next day and having a drink is not going to cure them.”

Pete now works at CGL, providing one to one support for others who are working through alcohol addiction.

“My work now keeps me on the straight and narrow – it’s really important. I work with people affected by addiction and advise them how best to deal with their problems. It’s amazing how quickly people can go from drinking heavily to being alcohol dependent.”

He is now encouraging others to reach out and get support as part of this year’s Alcohol Awareness Week campaign.

“Don’t be afraid to go and get some help and try to go as early as possible. If you’re remotely concerned, go and speak to somebody. Catching something early is so much easier. As soon as you feel it’s getting out of control, pick up the phone.”

Councillor Boyd Elliott, Chairman of Adult Social Care and Public Health Committee at Nottinghamshire County Council, said: “Thank you to Pete for speaking out about his former addiction and well done to him for getting it under control and helping others to do the same. Figures show that drinking levels have increased during the pandemic but, like Pete, many people may tell themselves they have things under control. If you’re worried about yourself or someone else, please contact CGL for professional help.”

Public Health England data* shows that there was a 58.6% increase of people reporting that they are drinking at increasing and higher-risk levels when comparing March 2020 and March 2021 (50 units a week for men, 35 units a week for women). The NHS advises that men and women do not drink more than 14 units a week on a regular basis.

You can refer yourself or someone else for alcohol support to CGL: