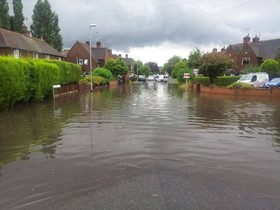 A £430,000 project to reduce the risk of flooding on a Hucknall street has been completed by Nottinghamshire County Council.

The project involved the installation of a 450mm diameter surface water pipe and new gullies on Thoresby Dale, which will take flood water away from the low point on the road into existing storage tanks.

These measures were designed following an in-depth study which was carried out by the County Council in partnership with Severn Trent Water, the Environment Agency and Ashfield District Council following the 2013 floods.

The funding was thanks to Flood Defence Grant in Aid (£50k) and Local Levy (£380k) which are funding schemes administered by the Environment Agency.

More than £6.4 million of external funding investment is available to support the Council’s main programme for flood protection schemes in the county.

Councillor Phil Rostance, Vice-Chairman of the Council’s Communities and Place Committee said: “The residents on Thoresby Dale have already suffered two major flooding incidents in the last ten years, so these improvements will give them extra protection to help prevent further flooding.

“This project forms part of our long-term flood risk plan, which also includes a flood prevention scheme due to start on Titchfield Park Brook in the town.”

Thoresby Dale resident Bill Ward was instrumental in pushing for the improvements. He said: “There has been flooding on this road pretty much all of my life but in recent years the flooding has got much worse and has gone into people’s houses.

“It’s heart breaking to see all the damage the flooding causes – the ruined flooring and plastering and everything.

“I could see how things could be improved and the Council has listened to my suggestions which is great. There is not much more they could do to stop flooding here in the future.”