Flood affected businesses offered up to £2,500 to recover losses 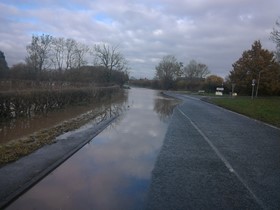 Nottinghamshire County Council has announced details of the government scheme to offer businesses impacted by the recent flooding access to a one-off grant to support their recovery efforts.

The Business Recovery Grant is part of a range of financial support schemes being made available to communities impacted by the recent flooding in Nottinghamshire.

Record and sustained rainfall caused river levels to rise across the the county causing widespread flooding of households, businesses and farmers with worst hit areas such as Worksop bearing the brunt of the damage as well as communities in Retford, Mansfield, Newark and Rushcliffe.

The Council has already supported householders and businesses with hardship grants totalling more than £100K aimed at offering immediate financial support those in the worst affected areas.

A multi-agency recovery operation commenced in the immediate aftermath of the floods involving county, district and voluntary agencies in helping to get Nottinghamshire up and running again including a major road repair and clear up operation.

Councillor Kay Cutts MBE, Leader of Nottinghamshire County Council said: “I appreciate how heart-breaking it must be for small businesses who saw their livelihoods hit so hard during the recent flooding which is especially hard in the run up to Christmas.

“The County Council has taken steps to introduce the government’s Business Recovery Grant to specifically support those who need help so they can take immediate steps to begin trading again.”

The Business Recovery Grant is in addition to a hardship grant already offered to residents and businesses which was launched in the immediate aftermath of the floods.

Small and medium sized businesses can check they qualify and apply for the Business Recovery Grant by completing the form on the County Council web site: www.nottinghamshire.gov.uk/businessrecoverygrant

Qualifying businesses are typically those whose premises were flooded or who were evacuated from their businesses during the recent flooding.

These grants are in addition to a range of other support options available to businesses such as:

Farmers are also being offered specific support as part of the Farming Recovery Fund available by accessing the following link: https://www.gov.uk/government/collections/the-farming-recovery-fund