Do your bit for Notts! 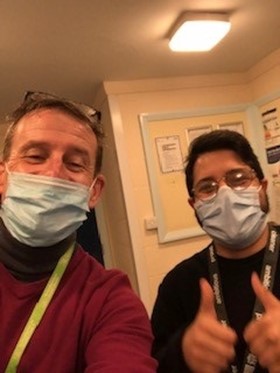 People are being urged to do their bit for Notts by volunteering to help run the vaccination centres across the county and City.

Paul Roberts, who works for Nottinghamshire County Council, offered his services as part of the initial call to action by the NHS.

Paul woke up on Sunday with aching muscles after being on his feet throughout his Saturday shift, but he’s still buzzing from the experience which is very different from his day job as a programme officer.

Paul said: “Don’t let that put you off. What a personally rewarding experience it was after spending nine months stuck in front of three screens in my dining room, to now be able to engage with the public and other professionals, was great – albeit masked up!

“I did a six hour session at the Gamston Hub and was allocated the reception and booking-in role working with my newly acquired friend - a young trainee social worker called Emilio from the City Council, who was great to work with.

“I met volunteers from a few of the district and borough councils and, of course, a range of health care workers. The police were also doing a great job outside of the centre, pre-screening and keeping people safe as they entered the centre. It was brilliant multi-agency cooperation.

“It was really well organised; there were good systems and controls, and to say it was most people’s first shift – it was quite amazing really. My shift leader was superb and had to seemingly be in 20 places at the same time to keep things running smoothly.

“I was on my feet whole shift which will do me some good, although my bones were a little stiff the next morning. As for the role itself; it was part of my job to do symptom checks, electronic temperature checks, hand sanitation and mask checks to make sure everyone entering the Vaccination Hall was COVID safe, and then booking people in using the electronic tablet.

“The system worked well and people were generally in and out within half an hour, which includes the 15 minute post-vaccination-sit down. There were hardly any queues all afternoon and I think we completed nearly 500 vaccinations, with only three people not showing.

“I have since booked myself in for more shifts – nearer my home, at the Richard Herrod Centre in Carlton, for the next five Saturdays.

“There are important other jobs that volunteers were doing such as pre vaccination assessments, checking ID, well-being and health checks and data input, amongst others.

“I am so pleased I got the reception role and the people were so grateful and cheerful. Some were frail, some nervous, some on their own, others brought in by family or carers. It was a real pleasure to help.”

Volunteers are needed to work six hours shifts between 8am and 8pm, seven days a week. They need to be in good health and aged between 18 – 70. All successful candidates will be given a package of training and support to assist them in their role.