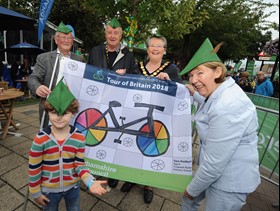 It's estimated around 200,000 people turned out to watch the Tour of Britain cycle race as it came to the county last weekend, with organisers heralding the Nottinghamshire stage as having the ‘best crowds and best local-buy in of the whole Tour’ as well as the most displays of land art.

Milllons of viewers from around the UK and across the globe tuned in to watch the cyclists as they zoomed passed our top landmarks, well-loved legends and lovely countryside.

Dozens of impressive land art displays helped Nottinghamshire stand out along the 215 kilometre route – the longest stage of the Tour. This included villagers at Norwell who transformed an 18th Grade 2-listed pinfold – formerly used for keeping stray animals years ago  – into an eye-catching bicycle wheel.

Other land art included a mining-inspired display at Bilsthorpe, A farm shop at Clipston-on-the-Wolds with its impressive 50ft hay bale creation and a giant bike at Radcliffe-on-Trent Golf Club.

County Hall arranged its own bike-shaped display with council vehicles. The 32-foot display helped highlight the range of services delivered by the County Council, including gritters, meals at home delivery vans and an electric bus.

Nottinghamshire County Council leader, Councillor Kay Cutts, was at the race start in West Bridgford and finish in Mansfield, as well as stopping in Southwell and then cheering on the riders as they rode through Robin Hood Country and passed the new Sherwood Forest Visitor Centre.

"It was an incredible day and shows once again that our county has what it takes to host an international sporting event of this scale.

“The support, goodwill and enthusiasm of local residents, businesses, schools was phenomenal. There was a marvellous atmosphere throughout the day and despite the weather, Nottinghamshire really shined.

"I want to thank those who turned out to line the route in their thousands to cheer on the riders. Organisers are due to confirm final numbers early next week, but early estimations suggest it was around 200,000 people.

“There were hours of hard work and imagination that went into creating the miles of bunting, countless flags, yellow bikes galore and creative displays of land art along the longest stage of the whole race.

“We will now be looking carefully at the TV coverage and photos to decide the winners of our own best dressed town and village competition.

“I was particularly proud to see spectators stand out in true Nottinghamshire style in a sea of green, as our County Council provided thousands of Robin Hood hats along the route.

“These hats proved to be very popular indeed, with overall race winner Julian Alaphilppe photographed sporting one of our Robin Hood hats.

"This was one of the day’s most iconic images and went viral across social media.

“Our stage winner Ian Stannard and local rider James Shaw also wore their hats on live TV.  which was great to see. “

Winners of the County Council's Tour of Britain flag and trophy competition also had a day to remember.

Sam Radburn, aged 6, a Cropwell Bishop primary school pupil who lives in Melton, waved off some of the world’s top cyclists, including Geraint Thomas and Chris Froome with the flag he designed. Sam said,

“I couldn’t believe that I had won this competition. I had a great day, I loved waving my flag to start off the race.”

Eva said “It was an exciting day. I was a little bit nervous to be helping present the trophy on live television, but I was proud with how my trophy turned out.”

Organisers are encouraging spectators of the Nottinghamshire stage to complete an online survey with their feedback. This is essential to helping gather vital stats about the event’s success and how it could be improved in the future.

The spectator survey is available here or go to www.tourofbritain.co.uk