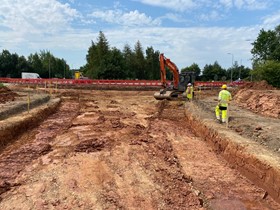 Progress on the planned flagship village at Top Wighay Farm near Linby which is set to create new jobs, housing and boost the economy by £870m over a decade* was discussed and formally approved by Nottinghamshire County Council’s Policy Committee.

Councillor Kay Cutts MBE, Leader of Nottinghamshire County Council, praised the progress made so far and told the committee that road infrastructure work is now underway and on schedule despite complications due to COVID-19 in the wider industry.

A champion of this development from the start, Councillor Kay Cutts said:

“The Top Wighay Farm development is one of the most ambitious projects ever undertaken by Nottinghamshire County Council. It will boost the county’s economic growth and will regenerate an area at the heart of our county, benefitting not only the current population but many generations to come.

“The Prime Minister wants to see more infrastructure projects in light of the pandemic.  In Nottinghamshire we are already on our way to delivering them.

“Gedling Access Road is due to open in Autumn next year and now work to create two new junctions is paving the way for this new planned village with more than 800 new homes, a new primary school, a local commercial centre, and green spaces.

“The development will also be home to a substantial business park bringing considerable investment and skilled jobs into the area.

“Nottinghamshire County Council has secured £8.8million of funding from Government and Homes England which will go towards the village’s infrastructure. This will include substantial improvements to both road junctions on the A611, to limit the impact of traffic on nearby towns and villages.

“Despite current practical complications due to COVID-19, we are enthusiastically leading this project to deliver the best result for the local community. The process for selecting our preferred development partner is also on schedule. A shortlist of five companies will now be invited to tender.”

Councillors heard how Nottinghamshire County Council was successful in a £5.8 million bid for Government funding to support the development via Homes England as well as an £3m investment via D2N2 government funding.  Together with additional funding from the County Council, a total of is £10.3m is funding the current phase of works.

“We will make the site as carbon neutral as possible. The area will be traffic-calmed, with sustainable travel options such as walking and cycling at the core of the development’s design.

“It promises to be the ideal place to bring up a family, which is why this project is one I cherish so much.

“The County Council’s new flagship office at Top Wighay will make the authority easier to access for many residents and will allow us to relocate staff from older, expensive-to-run buildings, saving money for the council taxpayer in the long term.”

The current highways work, due to be complete next Spring, includes the expansion of a roundabout on the A611/Annesley Road and a new signal-controlled junction as well as a new, three-metre wide, shared use footway/cycle lane along the northern side of the A611 north of Hucknall and to the west of Linby.

These current improvements are being carried out by Balfour Beatty and overseen by Arc Partnership.  Alongside funders Homes England and D2N2, other partners include the Scape Group and Via East Midlands.

The site is due to feature carefully thought-through cycling and pedestrian routes and conservation concerns will remain a key objective throughout the build phase, with trees and hedgerows being maintained.

The site will build upon existing landscape character to create an extensive and diverse framework of green infrastructure which encourages biodiversity and quality landscaping.  Attenuation ponds and innovative drainage systems will help regulate surface water and support wildlife.

* Research suggests the development will generate £870m for the economy over a period of a decade. Source: Economic Benefits Report January 2020 produced by Pegasus Group.