The present day Bestwood Country Park is just four miles from the centre of Nottingham, on the edge of Bestwood Village. The park and surrounding area was once a hunting preserve of some 3,711 acres, part of the medieval Sherwood Forest, which covered large areas of Nottinghamshire.

As part of the part of the larger Royal Sherwood Forest, Bestwood was a popular and convenient hunting location for local landed gentry and monarchs visiting Nottingham.

This popularity resulted in the construction of a mediaeval hunting lodge, and the eventual enclosure of the site - using pale fencing and ditching - to form the original Bestwood Park. The enclosed park remained in Crown possession until the 17th century and time of King Charles II. At this point it was gifted to his mistress, Nell Gwynn, and their illegitimate son, who became the 1st Duke of St. Albans.

The popular story is that Charles II and his guests, when staying in the lodge, would tease poor Nell for sleeping in and missing a good morning's sport. Charles II offered to gift to Nell, "All the land she could ride around before breakfast," and was surprised the next day to find Nell sitting for breakfast before the King and all the guests. It was claimed she had ridden out early, dropping handkerchiefs along her route, and the encircled area became Bestwood Park.

The fortunes of the Bestwood estate fluctuated regularly as parcels of the park were changed from hunting grounds for the wealthy, to individual tenant farms. In the early 19th century there were 13 farms in Bestwood Park, with familiar names such at Rise Farm, Top Valley Farm, Forest Farm, and Sunrise Farm.

The 10th Duke of St. Albans chose to base his properties (the Beauclerks) at Bestwood, rather than one of their other properties. William Amelius Aubrey de Vere Beauclerk had the most significant impact upon Bestwood Park. He encouraged competition between the tenant farmers with an annual agricultural fair. He demolished the medieval hunting lodge and in 1863 completed the rebuilding of a new Bestwood Lodge (now the hotel) after commissioning the architect S.S. Teulon. Teulon also designed and built both Alexandra Lodge - a main entrance into the ground and woodland of Bestwood Lodge - and Emmanuel Church - the Duke's family chapel. William also established the Bestwood Coal and Iron Company, which would later see the development of Bestwood Village.

Under the 10th Duke, Bestwood estate celebrated its golden years, with several visits from prominent society figures including Disraeli, Tennyson, Gladstone, and the well know party animal of his time, H R H the Prince of Wales (later Edward VII).

The importance of coal for industry saw that side of the estate's interests develop rapidly, but at the cost of the health of the miners and the families. The Duchess at the time was aware of the lack of facilities and opportunities for the growing number of working poor, so combined her organisational abilities and societal contacts to raise funds to provide facilities for Bestwood Village and the wider Nottingham area. Bestwood Colliery was soon to become the first mine in world to produce 1 million tons of coal in a 12 month period.

In 1898, the 10th Duke William Beauclerk died. The passing of the kindly and progressive Duke was mourned by many, and the streets on the route of the cortege from Daybrook Station to Emmanuel Church were lined with sorrowful and mourning residents.

The 11th and 12th Dukes chose to spend less time at Bestwood Park, with the lodge being leased at one point to two Nottinghamshire industrialists involved the lace and cycle industries.

The importance of Bestwood's coal industry made it a target for zeppelin bombing raids during the 1914-18 conflict.

In 1934 the 11th Duke died and his son Osborne de Vere took the decision to sell the estate in 1939. Farms and farmland to the south were acquired by the Corporation of Nottingham in order to create more housing.

However, in 1939, Bestwood Lodge became headquarters for Northern Command, and the surrounding estate served many purposes during the Second World War. Today it is still possible to find trenches and other excavations where young men would practice before deployment to the battlefronts of Europe and elsewhere. Following Operation Dynamo - the evacuation of Dunkirk between 26 May and 4 June 1940 - Bestwood provided a temporary respite for some of the 311,000 British and French soldiers traumatised after facing an uncertain future on a burnt and bombed-out French beach.

With a kind of peace descending in Europe, the post-war period saw the biggest changes to Bestwood's existence since the days of the 10th Duke. What farms were left either became housing, or were bought out-right by the tenants. 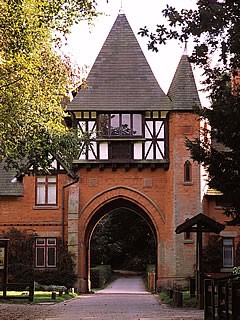 Like all mining, Bestwood Colliery came under state control for the war effort, but the 1947 establishment of the National Coal Board saw control become ownership. For 20 more years the pit functioned. The deepest shaft, Top Hard, was nearly half a mile deep. Drainage had always been a problem at Bestwood, and it was often thought to be the dirtiest pit to work in of all those on the north side of the city. In 1967, it was decided to end mining at Bestwood: miners were offered either generous redundancy or reallocation to one of the nearby pits such as Linby or Gedling. The coal mine fell silent for the first time in around 100 years.

The iron foundry also closed, and the two sites and their associated waste areas were re-landscaped by Nottinghamshire County Council.

There was still a military presence at Bestwood Lodge and the surrounding area. During the 1950s and 60s, the 49th Infantry Brigade The Polar Bears had their headquarters in the lodge, followed by the Royal Army Pay Corp. In 1973, the lodge, gardens and nearby parkland were handed over to Gedling Borough Council.

It was then that the two councils came together in partnership to set up the country park for wildlife, and also as a public open space for the city, Bestwood Village, Arnold, and Hucknall.

The 690 acres of Bestwood Country Park form a peaceful oasis on the northern edge of the City of Nottingham. The former Winding Engine House of Bestwood Colliery has been restored, and the site is important both for recreation and nature conservation.