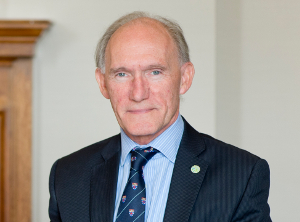 Sir David Greenaway served as Vice‑Chancellor of the University of Nottingham for almost a decade until 2017, having previously been a Pro-Vice-Chancellor.

A Professor of Economics, Sir David was the founding Director of the Leverhulme Centre for Research on Globalisation and Economic Policy. His research interests are in trade and labour market adjustment, cross-border investment, and international trade policy. He has acted as an advisor to the World Bank, European Commission and United Nations.

Sir David's contributions to public policy include Chair of the Armed Forces Pay Review Body, various NHS Board appointments, and major reviews for Government, including of uninsured driving, and more recently the way in which doctors are trained in the four countries of the UK.